Considered to be one of the fathers of digital art, Manfred Mohr was one of the first to use these generative methods digitally to make the majority of his works. Born in 1938 in Pforzheim, Germany, the New York based pioneering artist was originally a jazz musician and painter whose sensibilities leaned more towards the work of the abstract expressionists and action painters, in particular the works of K.R.H Sonderberg. However, he was then introduced to the work of German philosopher Max Bense whose Aesthetics of Mathematics sent him in the completely opposite direction. It became clear to the artist that to fully realize and communicate his intentions he would have to divest himself of the obscuring emotional nature of action painting and pursue more rationalistic constructions of geometric forms. If traditional art meant to stimulate the heart, his was meant to stimulate the mind. 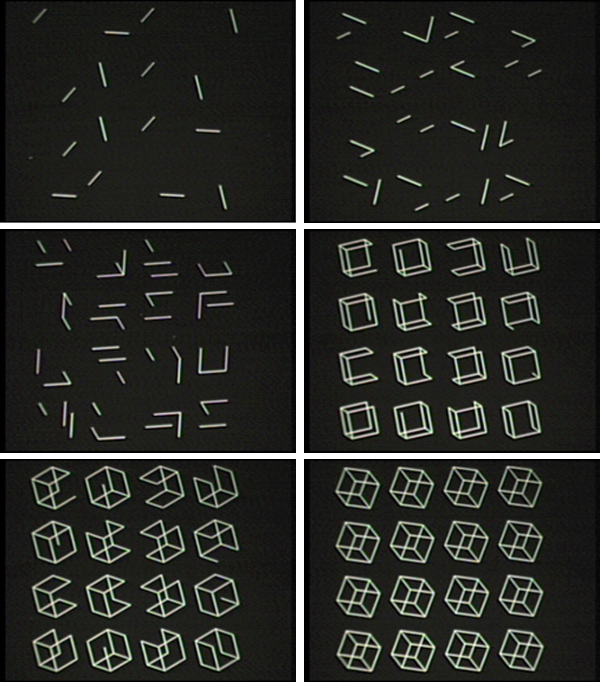 Mohr’s interest in a systematic generation of geometric forms predates even his use of computers. His work phase hard edge saw him introduce geometric shapes that would operate as visually expressive signs when juxtaposed with each other. Very early in his work he restricted himself to the colors black and white, a restriction that would last almost 40 years. The binary provided more freedom to focus on the spatial relationships of lines, points and shapes that would comprise the majority of his art. The breakthrough to actually use computers came when he met Pierre Bardaud, a musician composing music with computers. Subsequently, he was inspired by the meteorologists’ use of plotters and sought to use one for his work. Soon after he began programming his own algorithms in the FORTRAN programming language as soon as 1969.

An interview with Mohr can be read here.