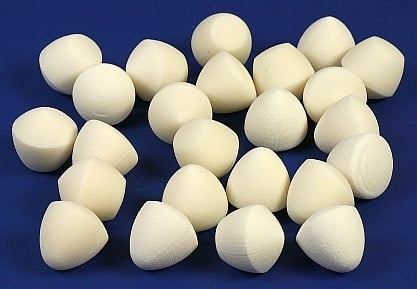 For those who never returned to geometry after racing through the grade school basics, there are many delights awaiting a second visit to this fascinating and often counter-intuitive branch of mathematics. Case in point, the Reuleaux Triangle and Meissner Tetrahedron.

See the video at bottom for a chance to see how having physical objects in the classroom can go much further to demonstrate how they work than an illustration — countering our visual prejudice when encountering these objects for the first time.

Here’s a brief overview of the Reuleaux Triangle put together by the talented teacher and educational developer Liz Arum from her series of 3D printing curriculum resources she created for MakerBot over several years. (Which remains one of the most handy resource for educators looking to put 3D printing in their classroom, regardless of printer vendor of choice.)

According to Wolfram MathWorld, a Reuleaux Triangle is a “curve of constant width constructed by drawing arcs from each polygon vertex of an equilateral triangle between the other two vertices.”

According to Wikipedia, “because all diameters are the same, the Reuleaux triangle is an answer to the question Other than a circle, what shape can a manhole cover be made so that it cannot fall down through the hole? The polygon is named after Franz Reuleaux, the 19th-century German engineer who was concerned with how machines translate one type of motion into another.

To draw the Reuleaux triangle start with an equilateral triangle. On each vertex, center a compass, and draw the minor arc between the other two vertices. The perimeter will be three nonconcentric arcs. This is a reuleaux triangle. It is not a circle, but, like a circle, it has constant width, no matter how it is oriented….

And here is a model you can download and print from Thingiverse, created by plenet:

The Meissner Tetrahedron is a body of constant width.

That means, you can use it to roll a plane on it like on a ball, and the distance keeps the same.

From the look of the somewhat irregular shape you might think that would be a bumpy ride, but it is not!