Makerblock shared his work-in-process Tiny CNC Drawing Robot — taking the effort to document and share everything about this process so that the many (like me!) folks eager to try this can follow along:

The [below] are nearly all the tools and parts you’ll need to build your own itty bitty CNC drawing robot.1 If you have a 3D printer and a spare Arduino, the rest of the parts should cost you around $20. Right now this robot only has two axes, but in the very near future I hope to add either a Z axis or a pen lift. 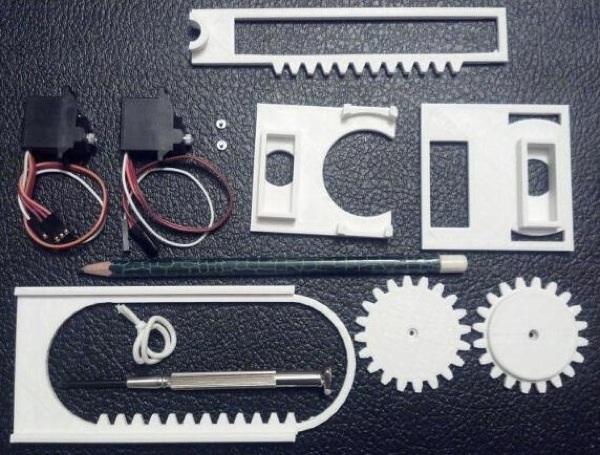 There are people making amazing things around the world, are you one of them? Join the 68,164 strong! And check out scores of projects they shared this week after the jump! 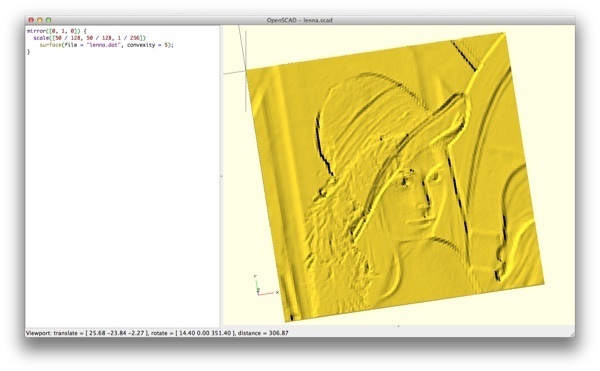 Cubehero shared a handy OpenSCAD tutorial: “Hi all. I wrote another guide on OpenSCAD. This time, it’s a bit more advanced, and involves commandline tools and a bit of Ruby: how to emboss and impress images onto a surface in OpenSCAD.” (read more) 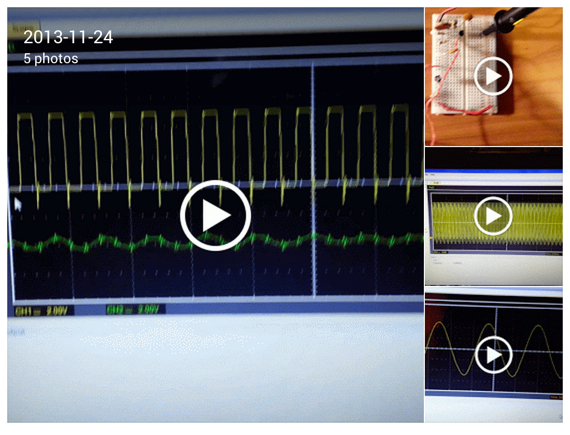 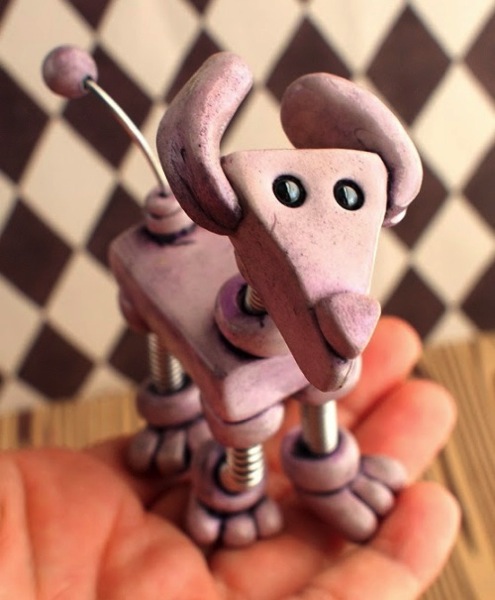 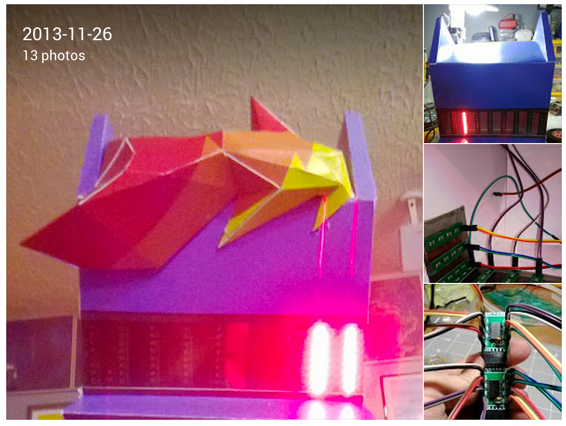 Zack Adams shared: “This is the R-Dash 5000 head I made for GMX Vol 5. This was my first time designing a PCB and soldering surface mount components. I used an attiny85 microcontroller attached to two high power shift registers to drive the LED strips. I designed it to be pretty modular so I could use the extra components in other projects. Currently it is programmed to scan back and forth like in the animation but I may add the ability to cycle between patterns in the future.﻿” (read more) 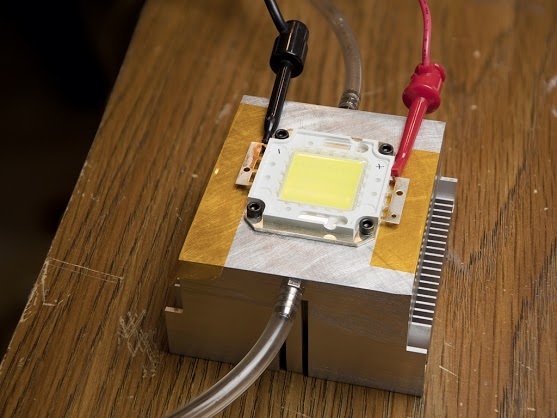 Oleg Mazurov shared: “Ghetto watercooling – as easy as drilling a hole through a heatsink and screwing in 2 barbs. Small aquarium water pump provides ~1L/min flow. 30W (Chinese, i.e., unknown efficiency) LED, 34W total power consumption per rower supply. Delta T between device case and water is less than 1C – I can live with that :-). The heating rate of 3Gal volume of water is ~2C/hr. at RT. Doesn’t have to be a heatsink either, any piece of machinable aluminum will work.﻿” (read more)

Jeremy Smoyer shared his own spin on the Adafruit Trinket Gemma Space Invaders Pendant tutorial project: “So I promised I’d make my wife I’d make her a space invaders pendant a little while back. Mostly so I could keep her happy and calm as little black boxes kept showing up at the house every week or so. It did the trick!! I showed it off at the high school where I teach math and am working pushing for STEAM education. Then, I took it down to her and she wore it for the day at the elementary school where she teaches art. We’ll let’s just say the little kids loved it!! So far she’s just had the stock Space Invaders code. However, tonight I whipped up some Tetris for her and have a Pacman version just about finished.” (read more) 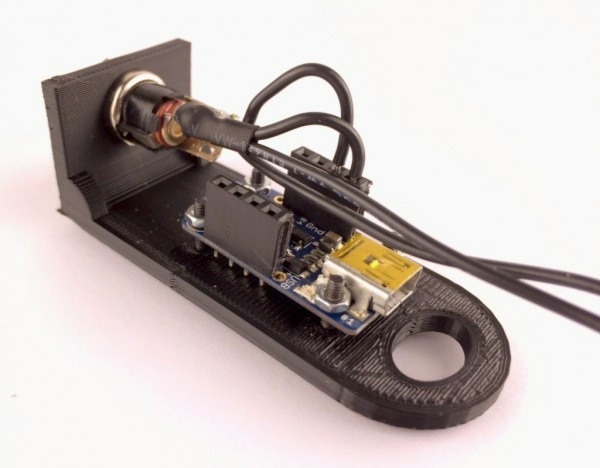 Brian @ Netninja created a Trinket Platter: “I thought I would point you to a 3D model I designed and printed for mounting a Trinket and a DC power jack together. It also has a point for zip-tying any loose wires. My particular usage is for placing the Trinket on my desk and connecting it to power as well as some lights and buttons. I didn’t want it to slide around too much and or put too much stress on the connections. A full enclosure felt like overkill, plus it’s more fun when people can see the parts. It can also work as a good prototyping board. Because Open Source rocks, the STL file and OpenSCAD source are available on GitHub.” (read more)

Mario shared a Adafruit NeoPixel Snake Game: “Snake, a fun and addictive game that has been around since the late 70′s. Its a game with few and simple rules and I think its the perfect thing to play on a NeoPixel Display.” (read more) 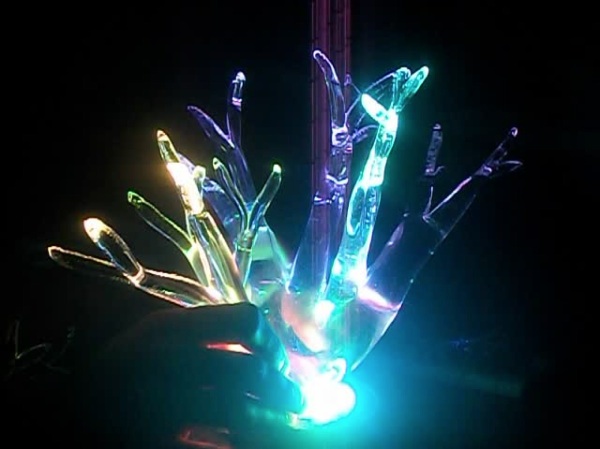 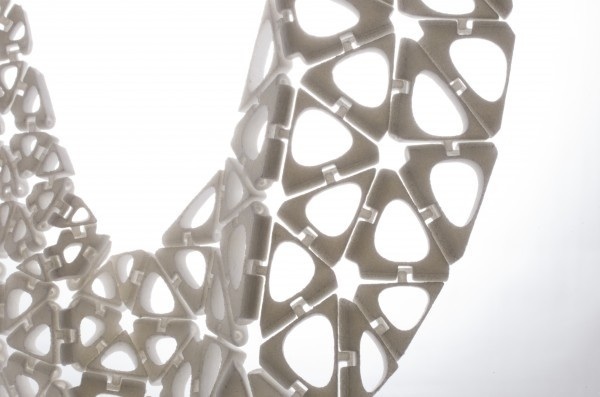 Nervous System shared an excellent behind-the-scenes write-up for their Kinematics apps: “Most of our projects start with a natural inspiration, but Kinematics emerged from a very different perspective. This project started with a technical problem: how can we create large objects quickly on a desktop 3D printer? …From the beginning, this project was focused making the most of the limitations of low-cost 3D printers. Unlike most of our work, which occurs almost entirely digitally before we see a real object, this required extensive physical prototyping. We used our MakerBot Replicator (v1, dual extruder) throughout the prototyping period to develop and refine our concept….” (read more)

Ryan Price shared his retrofitted, vintage Admiral television outfitted with an RPi running XBMC: “I replaced the guts of a 1950s era Admiral TV with a computer monitor and a Raspberry Pi running the RaspBMC Media Center. The set was originally set up as a visual menu aid at The Spork.” (read more)

Comments Off on Community Corner: Tiny CNC Drawing Robots, NeoPixel Snake Game, a Retro Admiral Set RasP XBMC Rig, and other Projects from this Past Week in Adafruit’s Community