Robert Noyce and the Tunnel Diode 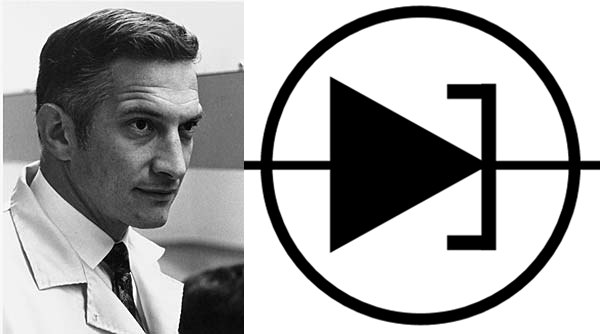 I have in my notebooks from [1956] a complete description of the tunnel diode,” the speaker told the audience at a symposium on innovation at the MIT Club of New York, in New York City, in December 1976. It was quite a revelation, because the speaker wasn’t Leo Esaki, who had won the 1973 Nobel Prize in physics for inventing the tunnel diode in the late 1950s. It was Robert N. Noyce, cofounder of Intel Corp., Santa Clara, Calif.; inventor of the first practical integrated circuit; and a man who, as far as anyone knew before that speech, had no connection to the most storied electronic device never to be manufactured in large numbers.

Engineers coveted the tunnel diode for its extremely fast switching times–tens of picoseconds–at a time when transistors loped along at milliseconds. But it never found commercial success, though it was occasionally used as a very fast switch. As a two-terminal device, the diode could not readily be designed for amplification, unlike a three-terminal transistor, whose circuit applications were then growing astronomically. Nevertheless, the tunnel diode was a seminal invention. It provided the first physical evidence that the phenomenon of tunneling, a key postulate of quantum mechanics, was more than an intriguing theory.

Quantum mechanics, the foundation of modern physics, is an elaborate conceptual framework that predicts the behavior of matter and radiation at the atomic level. One of its most fundamental notions is that the exchange of energy at the subatomic level is constrained to certain levels, or quantities–in a word, quantized.

Many of the core concepts and phenomena of quantum mechanics are almost completely counterintuitive. For example, consider a piece of semiconductor joined to an insulator. From the point of view of classical physics theory, the electrons in the semiconductor are like rubber balls, and the insulator is like a low garden wall. An electron would have no chance of getting over the barrier unless its energy were higher than the barrier’s. But according to quantum mechanics, the phenomenon of tunneling ensures that for certain conditions an electron with less energy than the barrier’s will not bounce off the wall but will instead tunnel right through it.

Comments Off on Robert Noyce and the Tunnel Diode