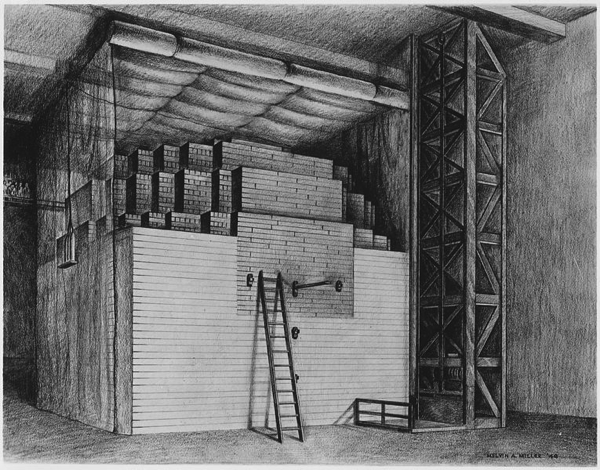 On December 2, 1942 the first nuclear-chain reaction was initiated under the supervision of Enrico Fermi. The reaction took place in Cook County, Illinois with the Chicago Pile-1, the world’s first nuclear reactor, built as a part of the Manhattan Project. The site is now a U.S. Historic Landmark. From wikipedia:

On 2 December 1942, CP-1 was ready for a demonstration. Before a group of dignitaries, George Weil worked the final control rod while Fermi carefully monitored the neutron activity. The pile “went critical” (reached a self-sustaining reaction) at 15:25. Fermi shut it down 28 minutes later.

After the chain reaction was observed, Arthur Compton, head of the Metallurgical Laboratory, notified James Conant, chairman of the National Defense Research Committee, by telephone. The conversation was in an impromptu code:

Compton: The Italian navigator has landed in the New World.

Conant: How were the natives?

Unlike most reactors that have been built since, CP-1 had no radiation shielding and no cooling system of any kind. Fermi had convinced Arthur Compton that his calculations were reliable enough to rule out a runaway chain reaction or an explosion. But, as the official historians of the Atomic Energy Commission later noted, the “gamble” remained in conducting “a possibly catastrophic experiment in one of the most densely populated areas of the nation!”