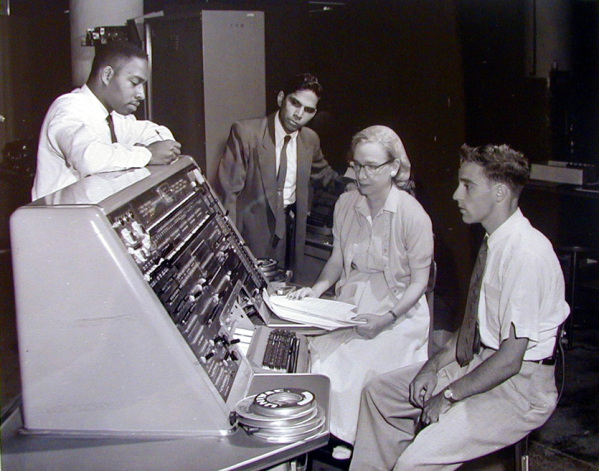 Grace Hopper is one of Adafruit’s favorite people of all time and today we celebrate what would have been her 107th birthday. Google has honored Grace as well with their homepage image. Here’s some information from her wikipedia page for those who don’t know about all of her amazing accomplishments.

Grace Murray Hopper (December 9, 1906 – January 1, 1992) was an American computer scientist and United States Navy rear admiral. A pioneer in the field, she was one of the first programmers of the Harvard Mark I computer, and developed the first compiler for a computer programming language. She conceptualized the idea of machine-independent programming languages, which led to the development of COBOL, one of the first modern programming languages. She is credited with popularizing the term “debugging” for fixing computer glitches (inspired by an actual moth removed from the computer). Owing to the breadth of her accomplishments and her naval rank, she is sometimes referred to as “Amazing Grace”. The U.S. Navy destroyer USS Hopper (DDG-70) is named for her, as was the Cray XE6 “Hopper” supercomputer at NERSC.

Filed under: ald, code — by Jessica