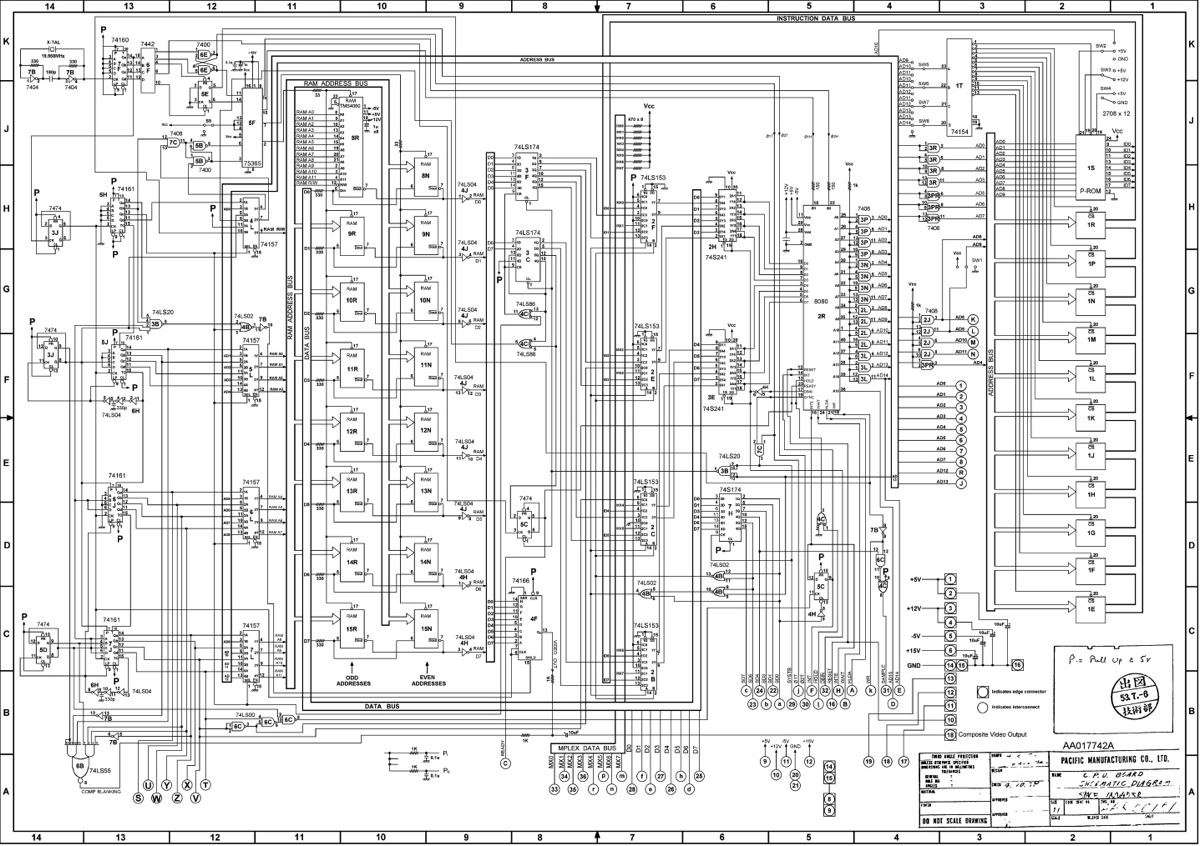 Space Invaders as described on the Wikipedia was one of the very first video arcade games. Released in 1978 by Taito, it ushered in the Golden Age of Arcade Games. Most video games before SI used dedicated circuit boards without a CPU. SI uses an 8080 CPU (the primitive forerunner of the Z80). The CPU board carried forward into several other games.

The game uses colored transparencies that overlay certain areas of the monitor. The player’s area is green and the flying saucer line is red. The overlays are obvious when you see shots changing colors at the top and bottom of the screen.

SI uses a black-and-white raster display (grid of pixels). Interestingly, vector graphics like in Atari Asteroids did not hit the market until 1979. In SI the hardware paints the monitor in the usual way: from left to right and top to bottom with a vertical retrace at the end. But the monitor is rotated counterclockwise 90 degrees counter-clockwise in the game cabinet. The rotation makes the code comments and screen coordinates a bit confusing. Here and in the code comments I’ll use the terms “rotated” and “non-rotated” to help.

Screen memory is organized as one-pixel-per-bit – eight pixels per byte. All sprites in the game are one byte wide but many rows long (on the rotated screen they are all 8 bits tall but 8, 16, or more bits wide). Rarely does a game sprite align perfectly to a byte boundary in screen memory. Most of the time the image pixels have to be shifted. Some of the pixels fall in the first byte of screen memory and some spill over into the next byte. The 8080 instruction-set lacks multi-bit shifts to make sprite rendering practical. But the SI hardware includes a 2-byte shift register mapped into port memory. The sprite drawing hardware runs all images through the shift register for a very fast bit-mapping.

In the early eighties you would have found the Space Invaders cabinet in an arcade right next to the pinball machines. So a “tilt” switch, like you would find in a pinball machine, would not have seemed as strange as it does today. If you shake, slap, or otherwise physically abuse an SI cabinet you will get a TILT message and your game will end.

Comments Off on Space Invaders