A Lamp With a Mind of Its Own, Inspired by Charles Darwin 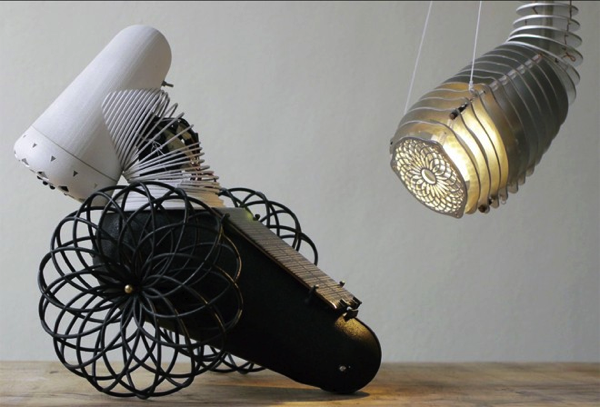 Typically, turning on a light involves nothing more than flipping a switch, but if Dutch designer Bob de Graaf has his way, in the future you may have to ask it nicely. He’s created a pair of robot lamps that will illuminate a room, but only on their terms.

Darwin, a wheeled bot, bears a passing resemblance to a puffin and scoots around a space bringing light to the darkest spots—which then become the brightest—and it starts the mission anew. Another robot called Wallace hangs lazily from the ceiling soaking up UV rays on its solar panels by day, but springs into action as a serpentine sentry at night, and hunts for light using built-in sensors.

It springs into action as a serpentine sentry at night.
Collectively, the pair are called Species of Illumination and are named in honor of Charles Darwin and Alfred Russel Wallace, a lesser-known scientist who independently developed the theory of evolution through natural selection and spurred Darwin to publish On the Origin of the Species. Darwin was fascinated by finches, and Wallace by snakes, which helped de Graaf shape their namesake robots, but he turned to the field to determine how they should move.

“I am fascinated by how things in nature move and how these movements are read by us,” says de Graaf. He first experimented with this phenomena by rigging up a crude RC robot that consisted of a wooden box for the body and a smaller box for the head.

He took this abstract automaton to a park and had it interact with passersby and got surprising reactions. An old lady tried to feed it, a man in a wheel chair raced it, and toddlers treated it like a pet. Enthused by the response, he set out to create more polished robots that would operate autonomously, enhancing the magical feel.

Comments Off on A Lamp With a Mind of Its Own, Inspired by Charles Darwin