Owners of pets and animal lovers everywhere talk to pets on a regular basis, and with certain animals — such as dogs — we can generally gauge how the animal responds. Dogs are the most emotive and responsive pet, but it would often be great to know exactly what is going on inside their adorable heads. ST, the research lab behind a crowdfunded rocking chair that charges your tablet as you rock, is now crowdfunding a collar that claims to translate a dog’s thoughts into human speech.

The rig, accidentally ominously titled No More Woof, aims to not only make your dog look like a futuristic army soldier, but let you know what the little guy is thinking. The headset-like device is composed of EEG recorders that are hooked up to a Raspberry Pi and speaker. ST claims that it has seen patterns in a dog’s thoughts, and identified a few major ones — when a dog is hungry, tired, or anxious because it sees someone it doesn’t recognize.

The rig doesn’t actually speak dog language — he won’t suddenly begin critiquing your favorite television shows and giving you pep talks after a break-up — but ST claims it can identify neural patterns associated with specific feelings. No More Woof identifies mental state more than coherent thoughts, such as the state of needing to go outside to pee, rather than the coherent thought of “man, I could really use a good fire hydrant right about now.” … 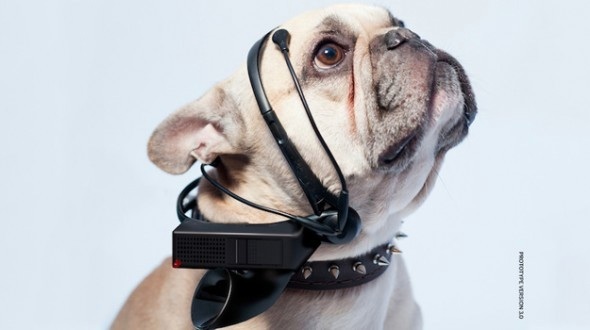