Everyone knows by now that we love Legos at Adafruit. That’s why we were so impressed by this incredible drawing machine made by Apple engineer Andrew Carol. Fast Co. Design has the full story.

The last time we spoke to Andrew Carol, he was telling us about the working replica of a 2,000-year-old Greek mechanical computer that he constructed out of Lego. He hasn’t spent the following few years sitting on his laurels. Quite the opposite: he’s designed and built ever more complex Lego contraptions, including a Babbage Difference Engine. His latest opus: a dizzyingly complicated Lego automaton that can write and draw at the turn of a crank. Check it out (although you might want to skip to the end after the first few seconds–the process is quite slow).

Andrew Carol, who works at Apple for his day job, says he got the idea for his latest creation after seeing Martin Scorsese’s Hugo–which features a mysterious automaton as well. “Walking out of the theater, my mind was spinning with ideas,” he tells Co.Design. He mocked up a prototype mechanism that used Lego chains to move a pen over paper in two dimensions. “It proved the idea was workable, but I did not finish it. It sat that way for well over a year,” he says. But in November of this year, Carol got the itch to finish his project. He spent “every weekend and the holiday week off” tinkering with his machine, and had it working by Thanksgiving. 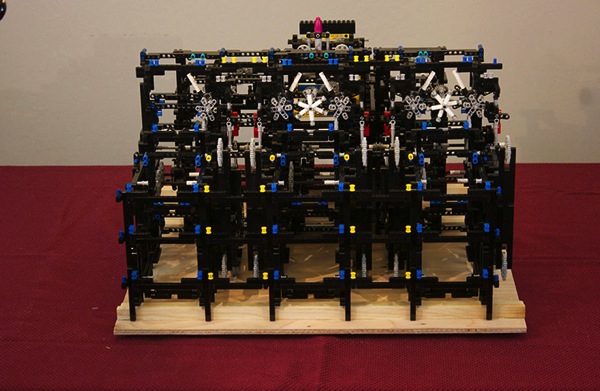 Filed under: LEGOs, projects — by Jessica