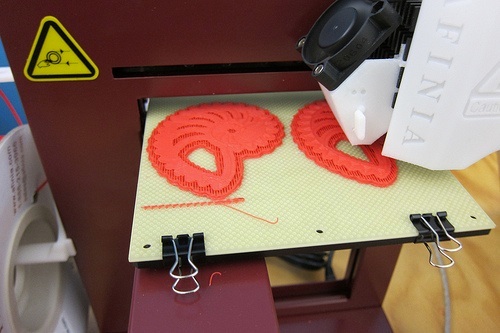 In an interesting turn of events in the desktop 3D printer patents questions coming up lately, Afinia did not back down when faced with a lawsuit from 3D industry giant Stratasys. Michael Weinberg from Public Knowledge examines the counters suit in detail in his post “Afinia Responds to Stratasys: Your Patents Are Invalid and Your Threats Are Anticompetitive.”

Here’s a brief note and excerpt from his analysis:

…As with Stratasys’ complaint, it is important to include a quick caveat when thinking about Afinia’s response.  Afinia’s response is written by Afinia’s attorneys and is designed to present all of the facts in a light as beneficial to Afinia as possible.  That doesn’t mean that there is anything untrue in the response, but it does mean that any claims made in the response should be taken with a grain of salt.  That being said, as with the earlier analysis of the Stratasys complaint, in an attempt to explain what is going on this post will more or less take Afinia’s claims at face value.

The short version is that Afinia challenges the validity of all four of the patents that Stratasys accuses them of infringing.  This goes beyond simply asking the court to decide that Afinia does not infringe on any of the Stratasys patents (although Afinia does do that).  Afinia is also asking the court to find Stratasys’ patents totally invalid, which would prevent Stratasys from asserting them against anyone else.  In light of Afinia’s belief that Stratasys’ patents are invalid, Afinia also accuses Stratasys of using this lawsuit and its patents to try and monopolize the 3D printing market….

Read more about the specific patents and issues involved here.