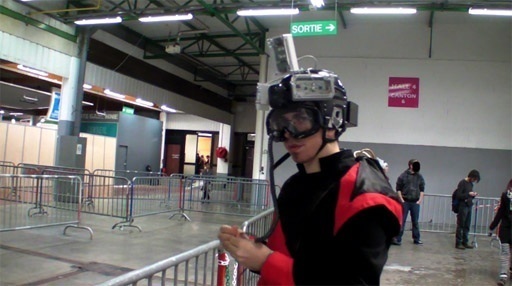 In honor of the secret desire of many of those limping home from CES right now, check out furrtek’s ridiculously powerful and obvious TV-B-Gone from the Adafruit Forums!

After a few years of regularly shutting down TVs with various versions of the TV-B-Gone, I wanted to see how far one could go without hiding anything. I’m aware it shouldn’t be a general rule since I only did the thing in 2 or 3 different countries, but until now, I find that the chances of getting caught follow some sort of gauss curve.

Hiding the device in an old phone, in clothes, or in food packaging only got me caught at a security check. Start of the curve. Holding the kit like a phone and faking a conversation also worked a few times. People assume you’re just using a weird phone and they don’t think twice about it. Just standing in front of a wall of TVs, pointing it or not got me kicked out of stores a few times. That was expected. Top of the curve.

Getting a bunch of hi-power IR LEDs in translucent boxes with other visible LEDs, mounted on a hockey helmet, with a glove remote… Didn’t get me caught once. End of the curve.

Nothing special electronics-wise: it’s basically the kit with an audio update function, NiMh chargers, timing watchdogs and mosfets. The enclosures are from Fibox and Velleman, boards are paper and epoxy stripboards. Batteries are 2x 7.2V 2.3mAh. Also dual RJ11 connection for the remote and status LEDs on the goggles.

There are people making amazing things around the world, are you one of them? Join the 71,837 strong! And check out scores of projects they shared this week after the jump! 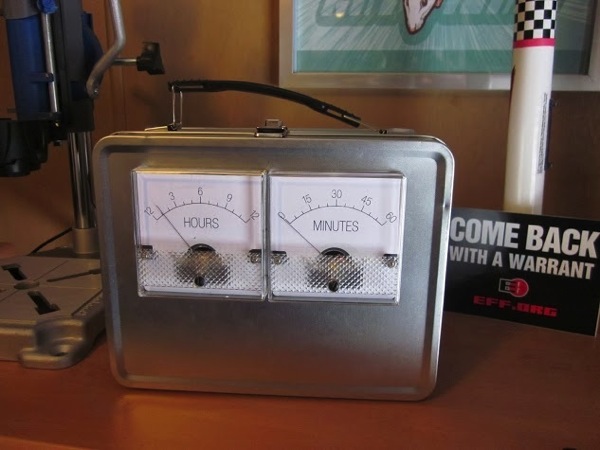 Marc Baker shared: ‘”Finished” my Trinket powered clock a couple nights ago. Thanks to Phillip Burgess for the awesome instructions in the Adafruit Industries Learning System.Link to instructions on ALS. My poorly documented build process can be found here. Still getting some erratic readings that need sorting out, but at least visually it’s come together nicely.﻿’ (read more) 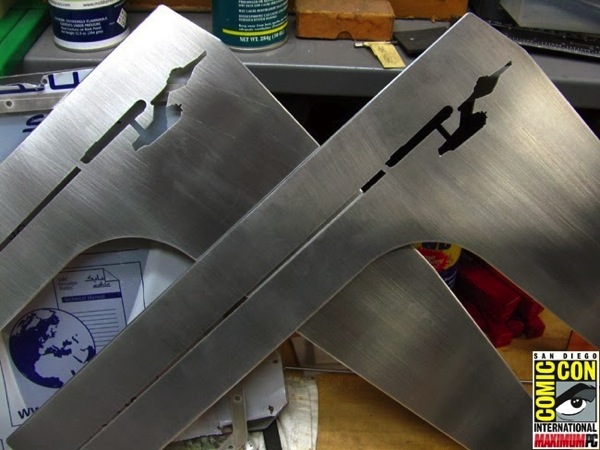 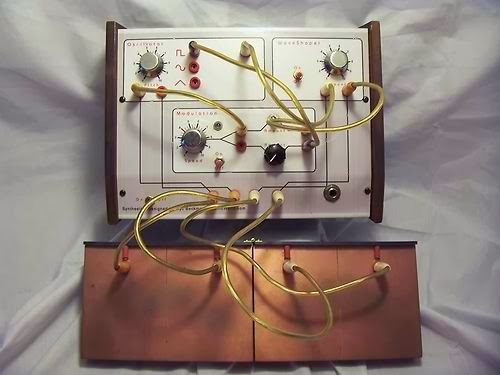 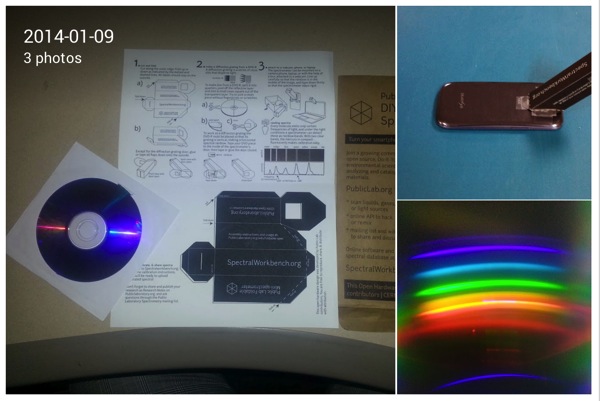 Steven Garrity shared: “I made a spectrometer today using my Samsung GS3 and a kit I ordered from spectralworkbench.org. The photos below show the kit parts, assembled and attached to my phone, and the resulting image of a fluorescent bulb in my office.” (read more)

Anders Wikström created this cool pi project: “Gingerbread house with lights that can be controlled over the web. Built with a Raspberry Pi that controls an Adafruit LED pixels strand using node.js / socket.io” (read more) 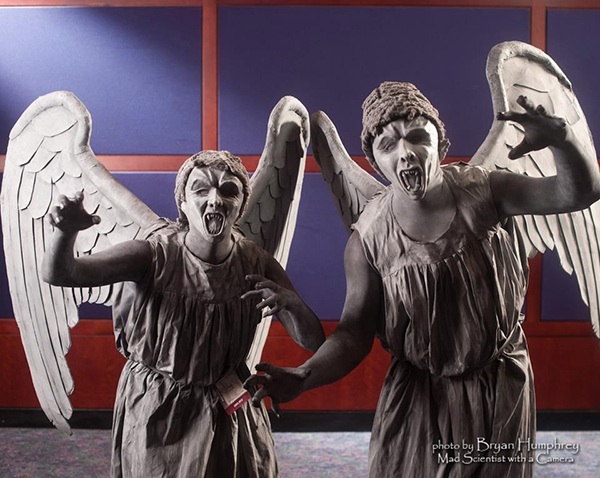 Cosplayer littlecasaroo and her dad worked together to build the Doctor Who villains, and they did it in just a week: “Here’s a peek into the work behind the work: reference images. To get the wings accurate, I went by screencaptures. I saw how far the wings extended on the actreesses, then measured myself to get the proportionally right size. Guidelines drawn onto the reference image help me design the wings to the right size and shape. Patterns were drawn on newspaper, then transferred to my wing base. The core of the wings is foamcore board. Normal sheets of foamcore were too small, but fortunately there are giant display boards designed for kids’ science fairs. Those have folds in them, but by using two layers of foamcore and lining the folds up so that they wanted to fold in opposite directions, they cancelled each other out and remained sturdy.” (read more) 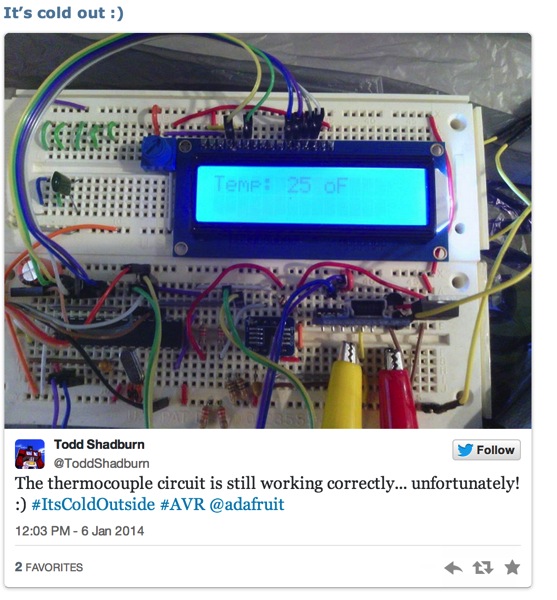 James shared a Twitter Enabled Automated Dog Feeder in the Adafruit Forums! “I just wanted to write a quick post about my first Arduino prototype as I really must thank many of the forum users and Adafruit support staff for their gracious answers to my questions. So without further hesitation, I present the Easy Eatery. This project was inspired by the fact that one of my dogs gets sick if we do not feed her at her exact feeding time. Yes, that’s right, total diva dog!! Due to frustration from wanting to stay out with friends instead of having to come home to feed this little princess, I decided to build an automated feeder that works much like an alarm clock that allows for two feeding times, but also has the ability to send a twitter message for verification to the user that everything went off without a hitch and also plays back your voice when it’s time to feed the dogs. Now, I understand this is not reinventing the wheel as there are many projects out there like this, but I felt it was a great way for me to gain understanding of how to program hardware using Arduino. [The video] shows some of the capabilities of the device. Again, a big thank you goes out to those who helped answer some of my questions.” (read more)

sideburn shared in the Adafruit Forums a project using an audio track to position eyes driven by a servo: “Powered by a RaspBerry Pi’s modified omxplayer to loop videos, the servo is controlled by way of the audio track in the video. The audio track is a series of digital PWM square waves that the servo understands in order to set the servo position.” (read more)

Michael Curry (Skimbal), during his self-imposed maker-residency at Hammerspace in Kansas City, appears to be making a 3D printed vehicle, system by system: “Update on my 3d printed vehicle project. Finished building the Rear Suspension test rig today. Next up is load testing, then on to designing some CV joints and driveshafts. Printed in PLA on two Makerbot Replicators. The parts are all printed at the default medium settings (2 shells, 10% density, .2mm layer height) except for the blue pins, which are printed at 20% density with 4 shells.” (read more)

Ghostbusters Costume With A Fully Operational Proton Pack! “My simplistic idea for how to make this work does however have the advantage of being both very easy to understand by the uninitiated and very simple to change if you want to alter the way the lights flash. The basic concept behind the code is that it runs a loop 6.4 seconds long, broken into 64 100 millisecond “ticks.” At each tick, I can have a light turn on, turn off, dim, brighten, etc. After it’s gone through it all once, it goes right back to the beginning and repeats until the battery runs out.” (read more)

James Wolf shared with us his “Smart Garage” Device with 3D Printed Enclosure Built Around Adafruit CC3000: “We are currently working on a “Smart Garage” device that is an IOT (Internet of Things) device that uses a home Wifi connection. The Smart Garage module allows the user to login to the webservice and find out if the door is open or closed as well as operate the door as necessary from anywhere in the world. The webservice uses WebSockets for real-time communication between device and server for both monitoring and control. The hardware is an Arduino Mega microcontroller with an Adafruit CC3000 Wifi shield. It also has a blue LED to indicate of Wifi access and a red one to indicate the door is open as well as a button to operate the door manually…”(read more)

Comments Off on Community Corner: Mightiest TV-B-Gone Rig, Hidden in Plain Sight, Weeping Angel Cosplay Costumes, and Other Delights from the Adafruit Community