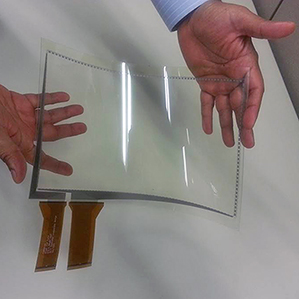 Flexible touch screens will be available soon for a variety of different purposes. MIT Technology Review has more on this exciting new technology.

3M will begin selling flexible transparent conductive films made of silver nanowires for use in touch screens. These nanomaterials could enable wider adoption of large touch screens for interactive signs, displays, and personal computers. And the flexible films may come to be used in future foldable, curvy personal electronics, too.

The St. Paul, Minnesota, company will make the films using silver nanowires produced by Cambrios, a Sunnyvale, California, startup founded in 2004 by two materials scientists: Evelyn Hu, now at Harvard University, and MIT’s Angela Belcher. The company’s silver nanowires are a few nanometers in diameter and a few micrometers long, and come suspended in inks. The inks can be spread out onto a surface to make sparse films. The silver wires are designed to spread in random networks, like nano pick-up sticks, so that they won’t cause a pattern that’s distracting to the eye—an irritating problem that plagued earlier metal-mesh touch screens.

The films are mostly empty space, so they’re transparent. But the nanowires and the ink are formulated so that these films are still highly conductive. The company claims that electrodes made from its ink are more conductive and transparent than the most commonly used touch screen material. Cambrios also says the material can be rolled and unrolled over 100,000 times without breaking.

Filed under: materials — by Jessica

Comments Off on Nanomaterials Could Enable Large, Flexible Touch Screens