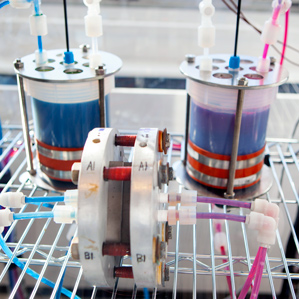 MIT Technology Review has an interesting new story about energy storage and new types of batteries.

Utilities would love to be able to store the power that wind farms generate at night—when no one wants it—and use it when demand is high during the day. But conventional battery technology is so expensive that it only makes economic sense to store a few minutes of electricity, enough to smooth out a few fluctuations from gusts of wind.

Harvard University researchers say they’ve developed a new type of battery that could make it economical to store a couple of days of electricity from wind farms and other sources of power. The new battery, which is described in the journal Nature, is based on an organic molecule—called a quinone—that’s found in plants such as rhubarb and can be cheaply synthesized from crude oil. The molecules could reduce, by two-thirds, the cost of energy storage materials in a type of battery called a flow battery, which is particularly well suited to storing large amounts of energy.

If it solves the problem of the intermittency of power sources like wind and solar, the technology will make it possible to rely far more heavily on renewable energy. Such batteries could also reduce the number of power plants needed on the grid by allowing them to operate more efficiently, much the way a battery in a hybrid vehicle improves fuel economy.