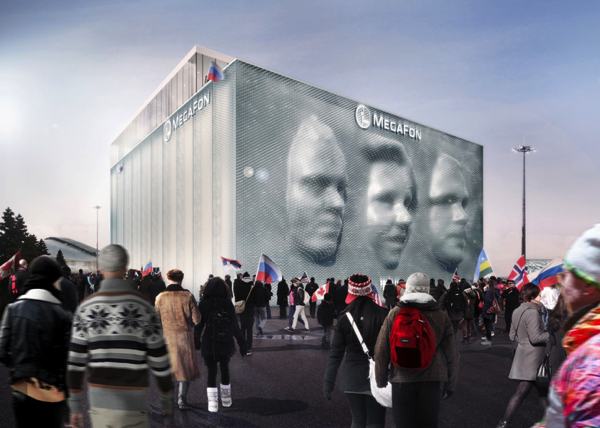 dezeen magazine has an awesome post about a giant art piece that is going up for the Sochi Winter Olympics.

Over 170,000 visitors to this year’s Sochi Winter Olympics will be able to have their faces scanned and recreated on the facade of a building as part of an installation by London designer Asif Khan.

Named MegaFaces and dubbed the “Mount Rushmore of the digital age”, Asif Khan’s facade is designed to function like a huge pin screen where narrow tubes move in and out, transforming a flat facade into an interactive three-dimensional surface capable of morphing into the shape of any face.

The facade will display up to three eight-metre-high faces at a time for a period of 20 seconds each, and anyone visiting the games will be able to participate by visiting a 3D photo booth and having their face digitally scanned. Five photographs will be taken of each participant’s face from different angles, before being assembled into a single 3D image.

After a scan has been made, the 3D image will be fed through to a engine and cable system attached to over 10,000 narrow cylinders, called actuators, that can extended out to lengths of up to two metres to recreate the shape of the face.

Each actuator will have an RGB-LED light at its tip, making it possible to precisely calculate the position of every pixel.

A fabric membrane is to be stretched over the facade to give a smooth surface to the changing forms, and the actuators beneath will be laid out on a triagonal grid to disguise junctions between pixels.

“In the area of a three-dimensional modelling of organic forms a trigonal structure is more suitable, because it makes three-dimensional forms appear natural and flowing even with only a small amount of pixels,” said Valentin Spiess, the chief engineer on the project. 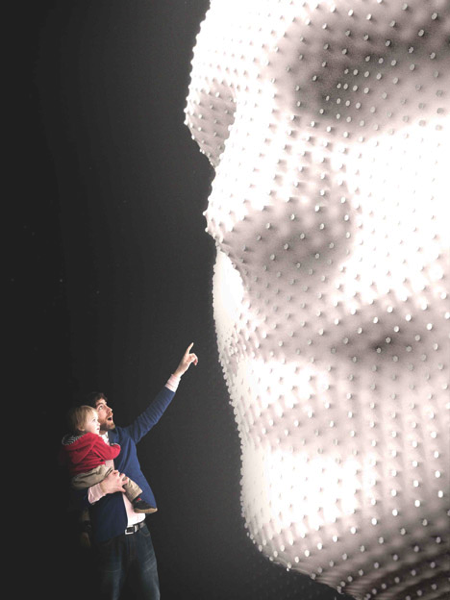 Filed under: art, design and architecture, leds-lcds, materials — by Jessica