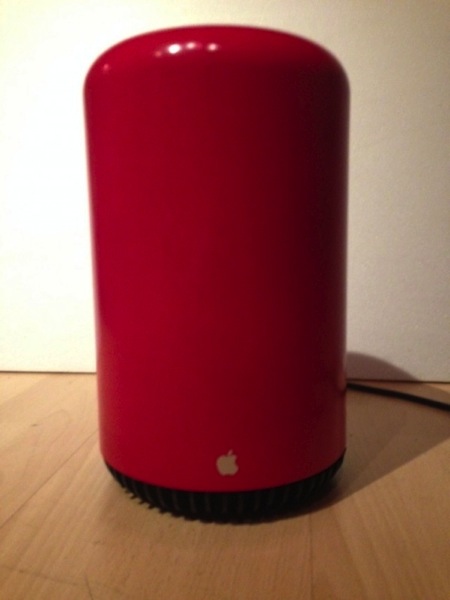 This is a heck of a case-mod project + hackintosh project, with double points for punning off the “computer in a trashcan” tease about the gorgeous new Mac Pros as well! Intrepid modder builds “Hackintosh” Mac Pro replica inside a real trashcan, via Ars Technica:

Jokes that Apple’s new Mac Pro looked a bit like a trash can began almost as soon as the computer was announced, but one person has taken the comparison to its logical extreme: he has built a “Hackintosh” out of standard PC components and stuffed all of them in a bathroom trashcan with more than a passing resemblance to the actual Mac Pro.

The images from the German DIY-er responsible for the project were posted to the TonyMacx86 forums earlier this month and dug up by 9to5Mac earlier today—TonyMacx86 is a popular resource for users who like to get OS X running on standard PC hardware. The build begins with a Gigabyte z78n Wi-Fi mini-ITX motherboard mounted to a couple of stands and a ribbon cable that allows the AMD Radeon HD 7750 graphics card to be mounted parallel to the main board. Additional stands hold the device’s two 2.5-inch drives (one SSD and one HDD, possibly in a Fusion Drive configuration). Fans mounted inside the case at the top and the bottom help with airflow. The whole computer is about 26cm high and 18cm in diameter, not far from the 25.1 cm height and 16.7 cm diameter of the actual Mac Pro.

It goes without saying that this machine’s performance will come nowhere near that of a fully decked-out Mac Pro. It uses a dual-core Haswell Core i3 chip instead of a four-, six-, eight-, or 12-core Ivy Bridge Xeon; it uses one standard gaming GPU instead of two FirePro workstation GPUs; it lacks the Mac Pro’s dual Ethernet ports and six Thunderbolt 2.0 ports; and it uses standard SATA storage and consumer DDR3 rather than the PCI express storage or 1866MHz ECC DDR3 of the Mac Pro. The DIY version has also got at least four fans spinning inside, rather than the single fan used in the real thing…. 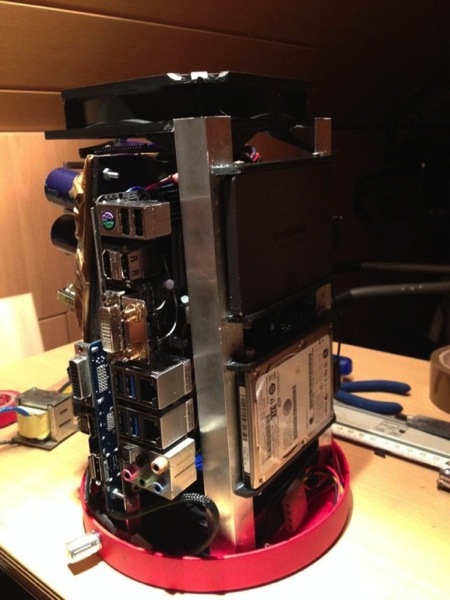