Some of BeagleBoard.org and Kickstarter in 2013

A quick survey of some BeagleBoard.org-based projects on Kickstarter that launched in 2013 provides some interesting lessons that are perhaps more intuitive than decisive. From 3D printers, home automation, robotic controllers, processing elements and accessories, designs using Beagle are starting to show up all over Kickstarter. Most of them are being successful, but not every project idea is a recipe for success. Perhaps the most critical lesson is to fully engage a developer community if you want your project to succeed. 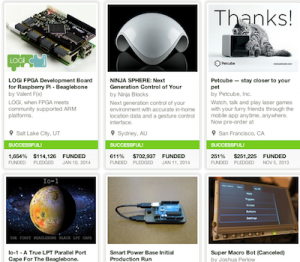 For example, compare a couple of cape daughterboard add-ons for BeagleBone, the Logi-Bone and Io-1. Both had relatively modest funding goals of around $7,000, yet the Logi-Bone exceeded its funding goals 16 times over while the Io-1 wasn’t successfully funded at all. What is likely to be noticed first is the professionalism of the presentation, including the web page and video, but examining both of them, is that really enough to make the difference?

Comparing more of the projects, another pattern stands out regarding successful projects and unsuccessful ones: projects executed by organizations instead of individuals. This may seem a bit discouraging at first given the idea that Kickstarter is the great equalizer, enabling individuals to gain funding without needing to sell out to larger institutions. Buried a bit beneath the surface, however, there are still a lot of reasons to be encouraged as an individual entrepreneur. In another video on Kickstarter from OpenROV’s David Lang, an idea emerges that self-guided development is most successful when it is less about going it alone and more about going it together.

David’s experience with successful Kickstarter campaigns began with his BeagleBone-based OpenROV underwater exploration vehicle. In the execution of that project, it is made clear that a large team is not required to pull off a successful project, but rather a small team willing to reach out to a broader community of developers to learn how to best execute their concept. Further, the point at which Kickstarter is engaged is after working within a smaller community that later becomes advocates.

This is especially obvious in the recent Ninja Sphere successful campaign that raised the most money out of these projects, over $700,000. Ninja Blocks started small in 2012 with a successful campaign based around a BeagleBone and has now taken the BeagleBone Black open hardware design to produce their new fully-customized home automation platform derived from BeagleBone. In between the two designs, Ninja Blocks has stayed engaged with the BeagleBoard.org community and continued developing community on their own around their open platform.

Just looking at my own personal inbox either from the BeagleBoard mailing list or direct messages, the rate of success has a lot to do with how much outreach you do outside your Kickstarter campaign and how early you engage the developer community. As other projects already active within the BeagleBoard.org community start to launch their Kickstarter campaigns, I think we’ll continue see this trend hold true.

Filed under: beaglebone — by Jason Kridner

Comments Off on Some of BeagleBoard.org and Kickstarter in 2013