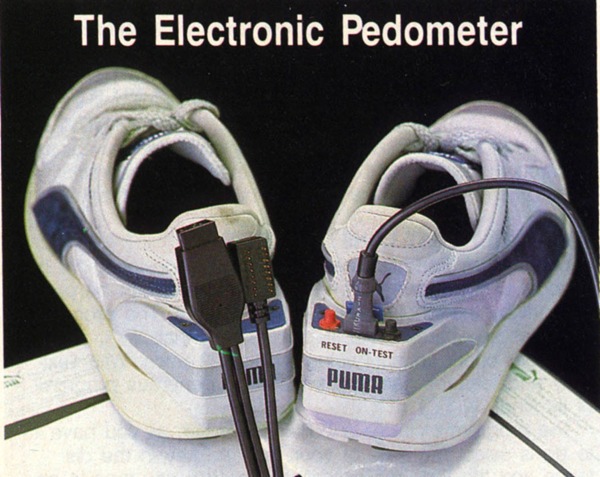 I saw the Puma tennis shoes Saturday night and figured I would email you guys some information about them, assuming anyone is interested. The company that did them was named T&C for Yash Terakura and Gerry Cohen, both ex- Commodore Business Machines employees as I am. It was around 1986, maybe a little earlier.

The electronics of the shoe itself was designed by Yash which benefited from his background and contacts in Japan as that was where mass production was mostly done back then.

The algorithm that converted the impulses from the shock sensor into distance was developed in conjunction with University of Pennsylvania Bio-Engineering Department, one of those early places where you would see people swinging golf clubs with little dots attached to their bodies.

Basically the algorithm maps the length between footfalls to the distance of the stride and and tries to determine the distance covered.

The project was also co-owned by a maker of extended memory cards for the early PC, as in the 4.77mhz IBM PC. It might have been IBM that did the card, however I don’t remember.

The promotion of buying a memory card with the Puma shoes and the cord was called:
“Jog Your Memory”.

It never did quite take off. By the time I was involved we were looking at the issues vs. fixing it or letting it kind of die a quiet death. We chose the latter unfortunately, but the ones you have may be examples of the first electronics in a shoe (or anywhere else?) as I definitely didn’t know anyone else doing this back then. Lol… I recommend you put them in a glass case as they should be pretty rare.