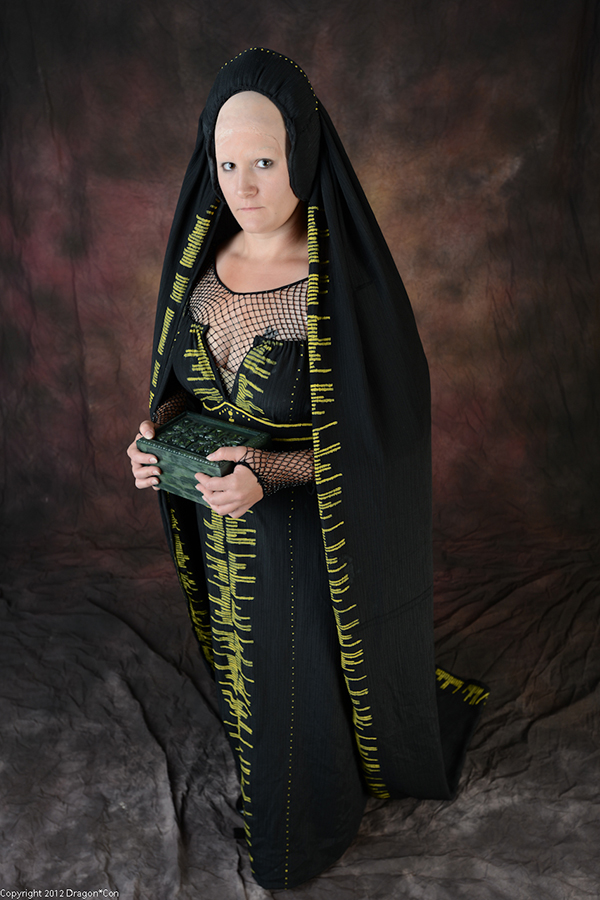 Sandworms may be giant and scary, but I’m more frightened of the Bene Gesserit. They’re calculating, ruthless, and spooky. Cosplayer Maggie isn’t scared of them though, and she made an impressive Bene Gesserit costume a few years ago. She researched by watching the Blu-ray frame by frame and sketched away. She said the head dress was the big task, and here’s how she assembled it:

I would cut a piece of cardboard I thought would look right then pin on some batting and it would be took big, so I would remove batting and try again. Once I had a shape and size that seemed to work, I placed the black fabric over the hood and sewed everything down. Curling it a bit I placed two pieces of elastic on the ends, one for behind my head and one for under my chin. Hoping that this would be enough support the weight I was about to place on it. I cut out the train/veil it was basically one giant teardrop shaped piece of fabric, and I made sure it was all one piece. I hemmed it and pinned it to the hood. I didn’t sew it on yet, as I wanted to make sure the shape, size, and length worked the way I wanted. Putting on the hood the elastic seemed to work the way I wanted and held the weight pretty well, so I sewed it in place and began painting. Thinking back I should have painted it and them sewed it in place, but it didn’t really make painting too much more difficult.

If you like Dune, keep an eye on the blog. We’ll be posting a series of costumes from the Dune universe leading up to Halloween this year!