Community Corner: Sensory Fiction, Heated Bird Bath, Modular 3D Printed Robotics, Drinkmotizer, and other Delights from this Past Week in the Adafruit Community

Felix Heibeck, Alexis Hope, and Julie Legault made this interactive wearable+book for a project called Sensory Fiction … and a bunch of the staff at Adafruit are obsessed with it:

Sensory fiction is about new ways of experiencing and creating stories. Traditionally, fiction creates and induces emotions and empathy through words and images. By using a combination of networked sensors and actuators, the Sensory Fiction author is provided with new means of conveying plot, mood, and emotion while still allowing space for the reader’s imagination. While the project explores new ways of reading with digital augmentations, this is not a product idea but rather an exploration in the context of Science Fiction stories. It is an artifact meant to provoke discussions. (read more)

There are people making amazing things around the world, are you one of them? Join the 73,450 strong! And check out scores of projects they shared this week after the jump! 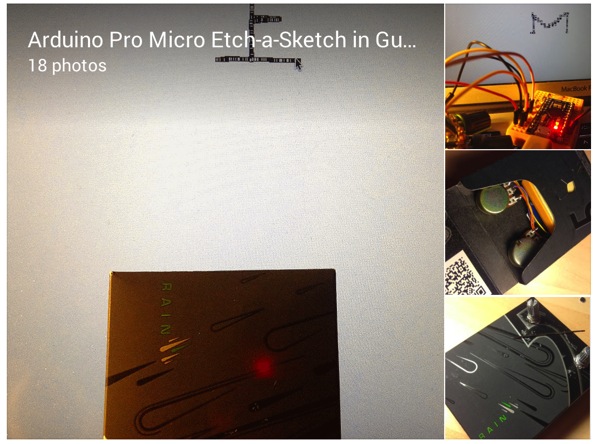 Hackerlings and Yuan Liu shared: “With help from friends in +Hackerlings, I made this digital Etch-a-Sketch using Arduino Pro Micro in a gum box. Total US$6.5 – knobs far more expensive than potentiometer:-( (US$10 if counting the accelerometer yet to be used.)” (read more) 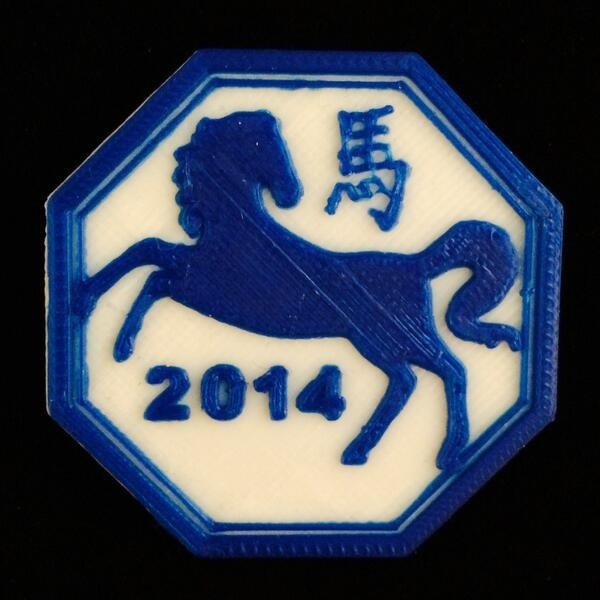 Josh Ajima shared: “Happy Lunar New Year Maker friends (Jan. 31st) I designed a Year of the Horse Medallion for 2014 and published the design on Thingiverse. I wrote an article about the process on my blog. I’ve been thinking lately about the need of schools and educators with 3D printers to have access to designs related to culture, history and current events. If you have any feedback, please get back to me with a comment.﻿” (read more) 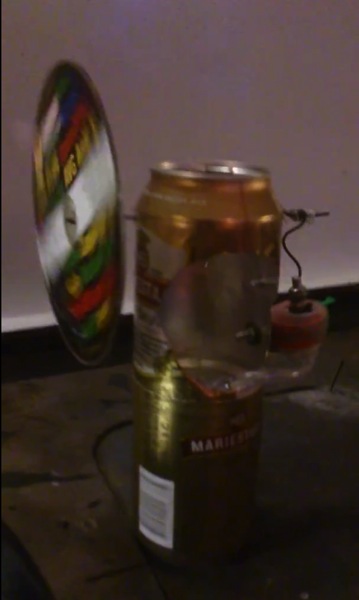 Anders Jackson shared: “A little hot-cold air machine made within 2 h work. My first try, so I’m happy it just worked. Yes, it runs on top of a wood stove.” ﻿(read more)

Brian Gardner shared: “Here is a project I got working this weekend. It is the start of a control system for a robot. Allowing a PS3 controller to be used for some local school instead of a $500 setup they are using now.” (read more) 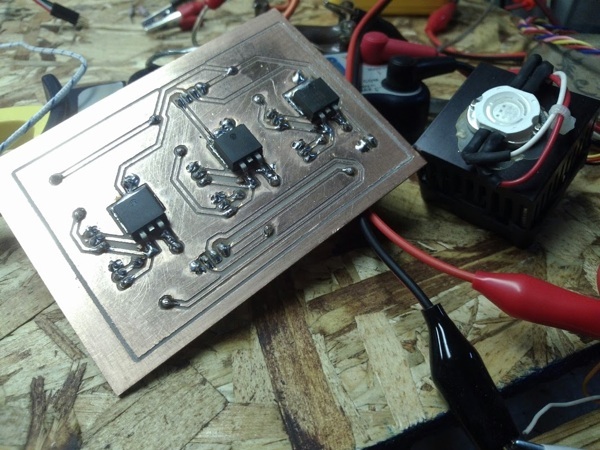 Alex Wiebe shared: “First milled board with SMD parts. Ok, they are very large SMD parts, but you got to start somewhere. (It is a constant current driver for the RGB LED sitting beside it. I’m trying to make a small pan tilt stage light to test my DMX program for my son’s budding EDM career.)﻿” (read more)

Matthew W shared: “I’ve been working on a new light show but I haven’t decided on any songs yet. Instead of sitting around trying to make up my mind, I worked on a Visual Basic program to manually control each component on the “stage”. This’ll come in handy when something eventually breaks. I posted a video demo of the panel this morning: Show Control, Visual Basic + Arduino﻿” (read more) 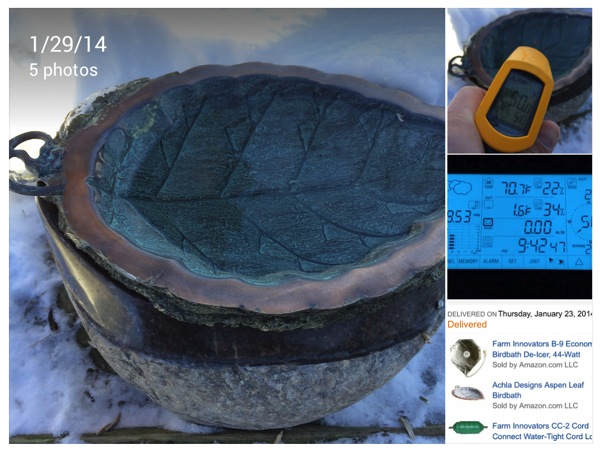 Leon Shaner shared: “How about that D.I.Y. heated bird-bath I made? =D It’s keeping the water a balmy 50º F even though it’s close to 0º F outside! The birds love it, because basically mine is the only source of fresh water around other than the snow…and of course it’s too cold to be melting snow with body heat just for a little drink. The birds can also sit on the edge and warm up a bit. Yesterday, I had five crazy little sparrows all taking a group splash together — it’s good to know that my work is being appreciated. =D ” (read more) 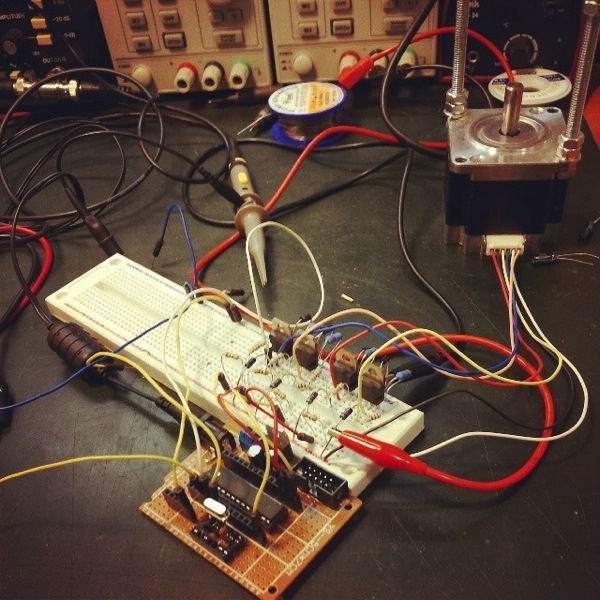 Michał Wilhelm Jany shared: “I was so disappointed with toshiba tb6560 chip, so I build my own driver with half h-bridge and atmega 😉 He even support microsteps up to 3600 steps” (read more) 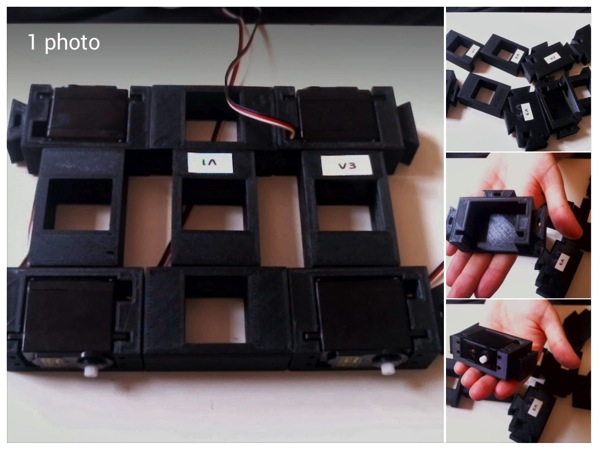 Jaidyn Edwards shared: “So what have I been up to? Trying to design a modular robotics building system. Still leaves a lot to be desired but it is functional none the less. The pictures say it all.” (read more)

Cabe Atwell shared his Drinkmotizer: Make me a drink, Drinkmo: ‘On every engineer’s senior design short list is/was a drink mixing robot. One of the few projects that’s fun at parties. You want the Drinkmotizer at your party… You need the Drinkmotizer at your party… At some point, dexterity for drink mixing is lost at a gathering. Drinkmo is your designated, sober, mixologist. Your enabler. Your friend. I know what you are thinking, “hey, there are other drink mixing bots out there, what makes this one different?” This one doesn’t break the bank. It’s DIY, Open, expandable. Artistically speaking, It isn’t just a nozzle that sprays alcohol at objects, it uses the actual bottle, and gravity.’ (read more) 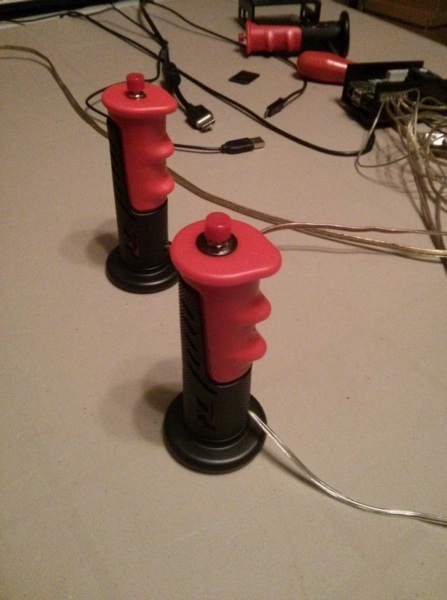 Maker Sandy Walsh made these great trivia buzzers using a raspberry pi: ‘Just before the holidays, my wife said “We should host a trivia night, it’ll be fun!” … of course, I turned this into a crazy project with custom buzzers and software. Some day I’ll learn. I settled on using my Raspberry Pi with the PiFace GPIO shield for inputs. Initially I was going to use the Pi for the GUI and an Arduino for the input processing. My thinking was the Arduino could constantly monitor the inputs while the RPi did other things. But it turns out the RPi was fast enough to do both, so the end result was much easier to deploy. The coding was a different matter, but fortunately I could work on this before the buzzers were all completed. I wrote the game in Python and used PyGame to handle all the graphics and input handling. The game is written such that the buzzers could be simulated with 1-4/5-8 for inputs so I didn’t need a PiFace for local testing.’ (read more) 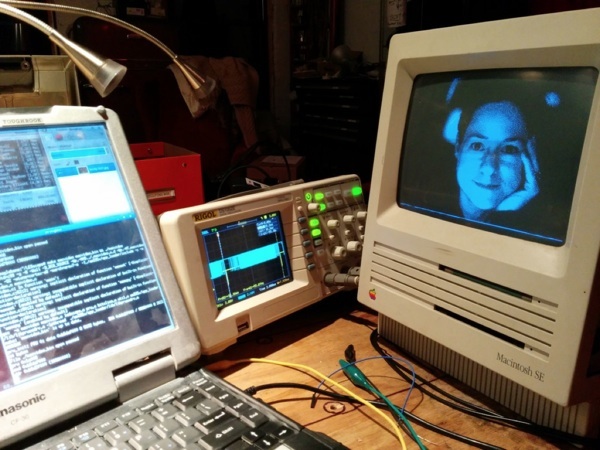 Mac-SE video by Trammell Hudson: “512×384 at 1 bit == 196 KB. Bit clock is 16 MHz, about 64ns per bit. Easily doable with BeagleBone Black PRU, but not from userspace due to the realtime constraints of generating the video signal.” (read more) 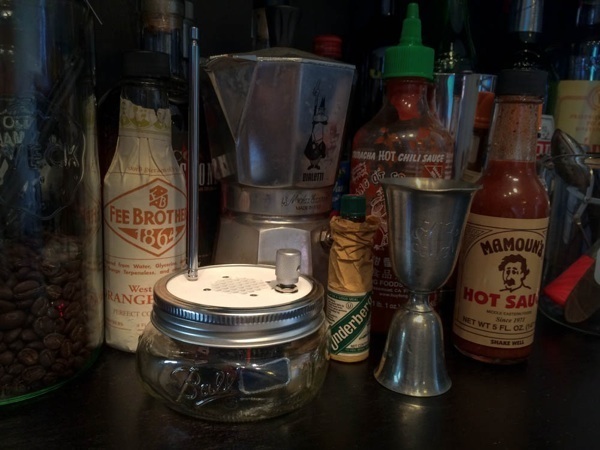 Spencer Wright and Zach Dunham shared their Public Radio project on the Adafruit Forums! “The Public Radio is a simple way to listen to terrestrial radio. It’s a standalone stereo, tuned right to the FM frequency that you love most. One speaker, one knob, one station – it’s always there, always ready.” (read more) 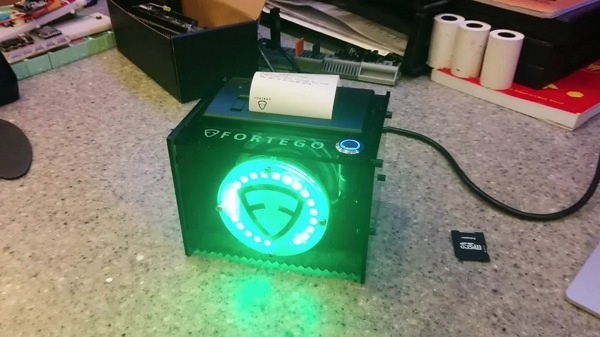 Riley shared the Shmoo Ticket Printer project: “…my day job collided with my maker lifestyle and I used your guy’s stuff to make it happen! I just wanted you guys to know because it was thousands of lines of python, some C and a whole bunch of rabbitMQ and out came our shmoocon challenge! I used your thermal printer to run our “shmoocon” challenge this year. It was amazing! We printed 5k “tickets” for our raffle. Each ticket was 1.5″. We had hacker challenges, some crypto, some obsfucated javascript, gps location challenges and last but not least IRC Trivia! I used your Thermal printer, Neopixels and customized your printer case to 1/8″ plexi. All in all it was great and I wanted to thank you guys for your products! Our challenge was a huge success. We had 10% of the whole con playing and generating tickets! It was a lot of fun. Here is a video of the python sending data via i2c to the raspberrypi to tell the digistump to change colors to red as the printer is now (or very close) to be out of paper. Thought you guys might like to know your printer printed for about 2.5 days straight!” (read more)

Brooks Zurn has created a sizzling dress with an LED matrix that can display words, inspired by the famous Twitter Dress. With some help from her friends at FamiLAB in Florida, she’s got 576 neopixels glowing: “I used 4 of the Adafruit 144 LED’s/meter neopixels. The full meter consists of two strips soldered end-to-end, so I de-soldered it in the middle to create the segments. After thinking of a few different approaches, a friend advised I sew sleeves for the strips , and then attach those to the garment. Then I found Adafruit had a Neopixel matrix library. It had a variable that could be changed for end-to-end, so I adjusted that. After that, it just worked!” (read more)

A team of veteran 3D designers and 3D makers invite you to help them put together a complete 3D printed statue at We The Builders: “Last week, as part of the museum’s 3D scanning and modeling project undertaken by Direct Dimensions, a scan was made of a bust of George Washington. The bust is a copy of a statue in the style of Giuseppe Ceracchi’s neoclassical “Bust of George Washington” (1791-1792) which is currently on display at the Walters Art Museum as part of the restoration of the nearby Washington Monument. ‘George Crowdsourcington’ used the 3D data from this scan and sliced it into 110 digital pieces – each tagged with specific coordinates (a handy feature for faster puzzling). Through the site We the Builders, people may request to print out a piece of the puzzle with their home 3D printer – “George Crowdsourcington” hopes that these 3D-printed puzzle pieces will be returned to them by the end of this week so they are able to assemble a 3D replica of the Washington bust in exactly the same scale.” (read more)

Comments Off on Community Corner: Sensory Fiction, Heated Bird Bath, Modular 3D Printed Robotics, Drinkmotizer, and other Delights from this Past Week in the Adafruit Community