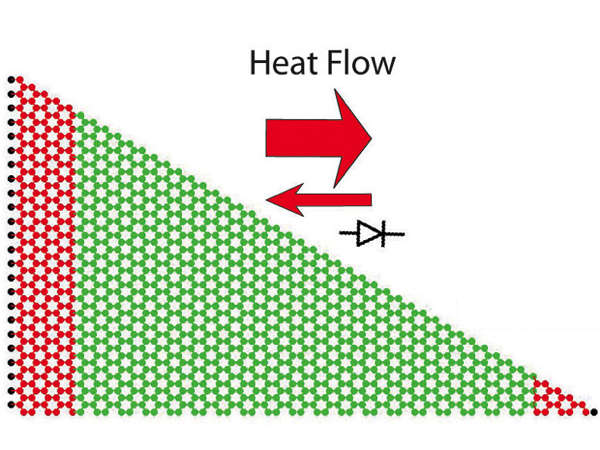 One of the critical functions for electronic devices is a process known as rectification in which an electrical current can be forced to move in one direction and then the opposite one. Rectification makes possible electronics devices such as transistors, diodes and memory circuits.

Now researchers at Purdue University’s School of Mechanical Engineering and Birck Nanotechnology Center have determined that a material based on graphene is capable of producing this rectification effect not on electric current but on heat flow.

While still just a simulation, the research shows that graphene can confine phonons to create a kind of “thermal rectifier” in which heat flow is directed like electrical diodes direct electrical current. Phonons are vibrations in a crystal lattice that carry heat, but outside of this work they are usually viewed as a nuisance to be eradicated because they produce noise in electronic circuits and cause other problems.

“In most systems, heat flow is equal in both directions, so there are no thermal devices like electrical diodes. However, if we are able to control heat flow like we control electricity using diodes then we can enable a lot of new and exciting thermal devices including thermal switches, thermal transistors, logic gates and memory,” said Xiulin Ruan, an associate professor at Purdue, in a press release. “People are just starting to understand how it works, and it is quite far from being used in applications.”

Filed under: EE, materials — by Jessica

Comments Off on Can Graphene Enable Thermal Transistors?