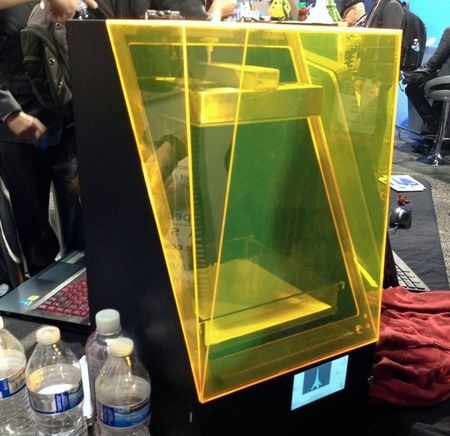 Some shots of the Full Spectrum Laser 3D printer, announced at CES, from Fabbaloo:

Everyone’s getting in on the laser-resin 3D printer market, it seems. Now we see Full Spectrum Laser, a company previously dedicated to traditional laser equipment, has produced their very first 3D printer, the Pegasus Touch.

The company currently markets laser engraving equipment, but launching a 3D printer is an entirely new venture. It makes sense as they can apply their considerable laser expertise to the problem. We got the impression they’re trying to make the lowest cost SLA 3D printer possible.

The Pegasus Touch, like most resin-based 3D printers, includes a transparent orange cover that keeps out UV rays that would otherwise solidify the resin. It contains a blue ray 405nm laser, which should be well-performing as Full Spectrum Laser knows their lasers. A spokesperson indicated 0.05mm resolution is possible, but 0.1mm resolution is standard.

This machine is not slow; we were told a 22cm Eiffel Tower model was printed in approximately five hours, suggesting a vertical print speed of ~40mm/s, at least for that model…. 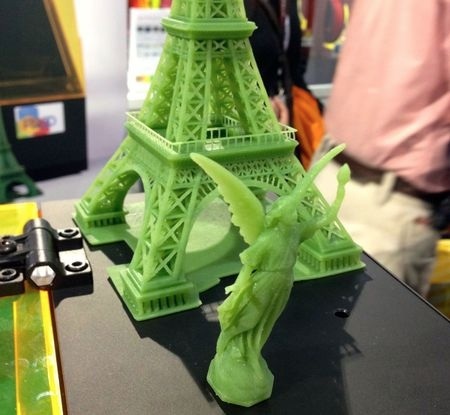 The Adafruit Learning System has dozens of great tools to get you well on your way to creating incredible works of engineering, interactive art, and design with your 3D printer! We also offer the MakerBot Digitizer in our store. If you’ve made a cool project that combines 3D printing and electronics, be sure to let us know, and we’ll feature it here!