3D Printing: Coming to a Classroom or Museum Near You 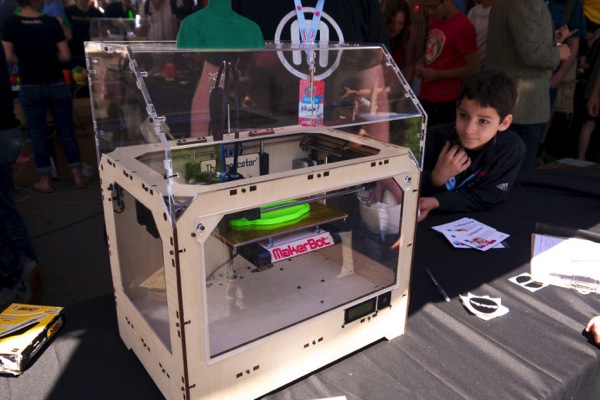 Maureen Kelleher reviews the growing trend of libraries and museums carrying and using 3D printers in educational exhibits, via remakelearning.org:

If 3D printing—which builds an object layer by layer based on precise, computer-assisted design specifications—hasn’t come to a school or museum near you yet, you can bet it’s on its way. Some industry watchers predict 2014 will be a big year for 3D in the classroom. While top-of-the-line models still cost a pretty penny, CNN has reported some smaller, stripped-down 3D printers are selling for only $200-$300.

The technology has already made quite a splash. As Pittsburgh’s own Gregg Behr, executive director of the Grable Foundation, recently pointed out in the Huffington Post, “People are already using 3D printers to make edible food and artificial body parts (what?!).” No kidding. (Read more about those body parts here.)

Or animal skeletons, or archeological finds from ancient civilizations, or other replicas of artifacts students don’t normally get to touch. At New York City’s American Museum of Natural History, students explore the intersection of paleontology and technology by examining allosaurus bones and using 3D printing to make a model skeleton. “It really taught me how paleontologists reconstruct and study dinosaurs and how they deal with disarticulated bones…and broken bones,” said Jordan, an 8th-grader, in this video about the experience.

At The Browning School in New York City, kindergartners aren’t just baking cookies—they’re making the cookie cutters, too. Engineering has become part of the curriculum across the grades, from 3D-printed cookie cutters to homemade Lego-style building blocks. You can see photos and video of their work here.

Comments Off on 3D Printing: Coming to a Classroom or Museum Near You