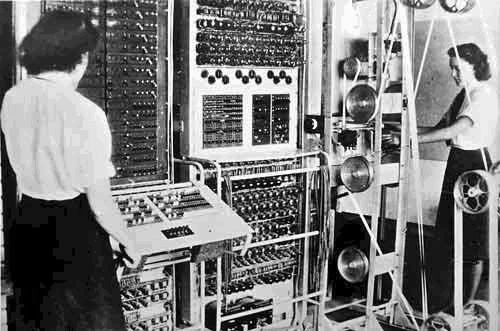 Wednesday was the 70th Anniversary of Colossus, the world’s first programmable computer. In honor of that, we found this project from a couple years back by mr pj evans, replicating the work of Colossus. He has a tutorial up on the site so you’ll be able to make one yourself as well!

Like many oldies who ordered a Raspberry Pi, I was more taken that such a thing now existed rather than having any kind of specific plans for it. Never mind, I thought, something will come along. Sure enough it did. A little background first.

In 2007, Tony Sale and the volunteers at The National Museum of Computing at Bletchley Park had completed their magnum opus: The rebuild of Colossus. This saw a major milestone after many years of works by the team as they toiled to recreate the world’s first programmable computer in as authentic a fashion as possible…

A rebuilt Colossus partakes in the ‘Great Cypher Challenge’. A Lorenz cypher machine was taken to the Heinz Nixdorf museum in Paderborn, Germany. Over the course of a day, messages were enciphered using the device and transmitted over teleprinter code (‘non-morse’) just as they were in WWII. In Bletchley, modern-day ‘Y’ station operators listened in on old radio sets trying to record the signal. At about 3pm, a clear message was received and Colossus was set to work. A few hours later, and with a little help from it’s modern-day codebreakers, all twelve rotors settings for Lorenz had been found and the message decrypted. Champagne everywhere.

In Bonn, a young cryptology enthusiast by the name of Joachim Schueth was also listening (fair enough, the competition was open to anyone). He had written some software that would not only act as an analogue for Colossus’ work (identifying the first five rotor settings) but would in fact handle the entire process from interception to revealing the plaintext message. He intercepted the message first time and had an answer 46 seconds later.

Jo has been kind enough to allow others to download his code, along with recordings of all three messages he intercepted, along with generous instructions on how to proceed. So, there was my first Raspberry Pi challenge, could it become a modern-day Colossus? It seemed appropriate after all, to see this little wonder of 2012 pit itself against it’s Granddad.

After a few tweaks I was able to get the whole process up and running on Eben and David’s little baby. Yes, the Raspberry Pi, running the standard Debian ‘Squeeze’ image, can not only replicate Colossus’ work but the whole process from interception to plaintext. Let’s call it Pilossus.

Comments Off on Colossus On A Raspberry Pi @Raspberry_Pi #PiDay #raspberrypi