Matt Heilman shared: “How much light can you generate with 1 watt?﻿” (read more)

There are people making amazing things around the world, are you one of them? Join the 74,149 strong! And check out scores of projects they shared this week after the jump! 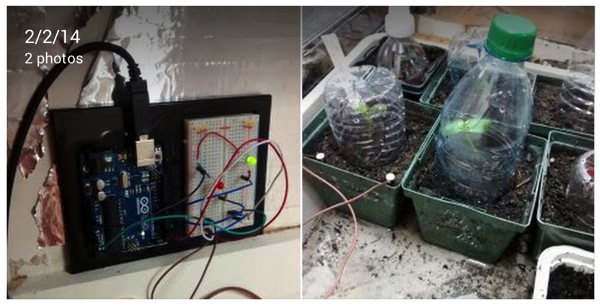 chris frost shared: “My first successful arduino project! It’s a soil moisture monitor. It checks Every 5 minutes and if the level is over a specific number it turns on a green led. Indicating its wet, when it falls between a specific level the red led turns on, and its time to water. I found some of the source code on the arduino forum and then modified it a bit 🙂 I’m quite proud of it. Test plant:Grey Mammoth Sunflower ” (read more) 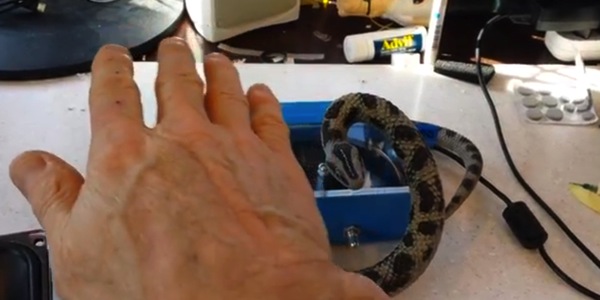 Don Kleinschnitz shared: “Makes snake sound when you stick your hand in a hole… made for interactive display ….﻿” (read more)

Evan Yeh shared: “This is a video of a drawing machine I built! Feel free to check the video out and the instructable I built this off of. (i used an adafruit motor shield for this actually)” (read more) 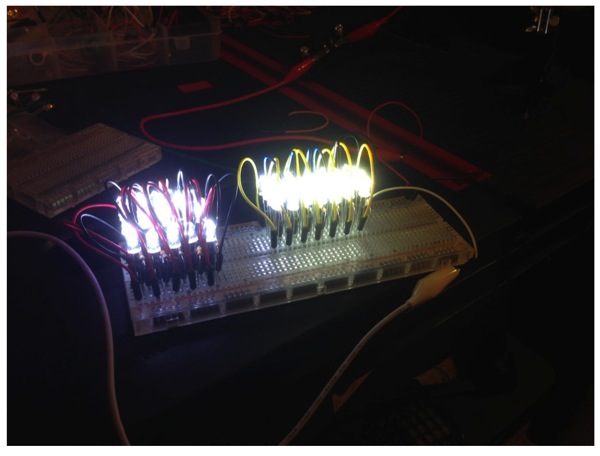 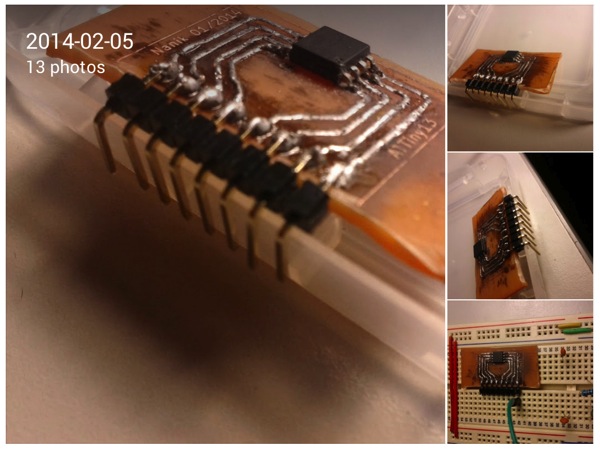 Nanik T shared: “Thought of spending bit of time before heading to bed soldering the header pin for my ATTiny13 board, but having too much fun continued trying to program it and it worked !!. This is the first time I’ve done a project that I design, etched, soldered and programmed and works directly the first time without any hassle of unsoldering or repeating the process again. It feels like you are inside a casino with chips in your hand and you are tempted by the house to win all the time 🙂 ” (read more)

The folks over at Raspberry Pi have dubbed this pan flute project “music hack of the decade”: “Panflute Hero was the result of a weekend at Way Out West Hackathon 2013. It’s a very silly panpipe version of Guitar Hero, which doesn’t use a plastic guitar controller. Instead, it’s controlled by a hand-built, bamboo set of faux panpipes (which are built according to the Golden Mean), all equipped with Arduino sound sensors that detect blowing, and controlled by a Raspberry Pi sending “blow” events to a desktop over TCP. Simulated flute noises are emitted when a “blow” is sensed, and…well, see for yourself.” (read more) 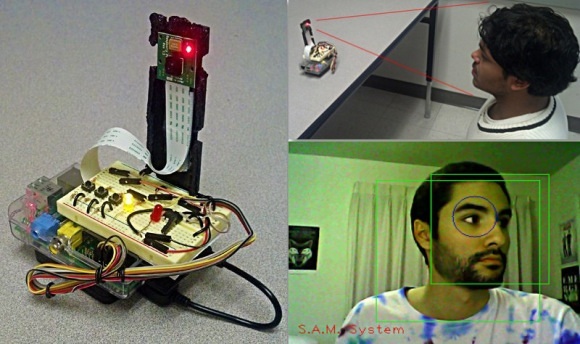 A team at Chico State University designed The Safety Attention Monitor (SAM) using a raspberry pi, leds, and more to help drivers to stay focused behind the wheel: “The team designed SAM using OpenCV to track your face in order to recognize when you aren’t watching the road. It alerts you through a variety of audible beeps and LED lights, and is programmed to only alert you after set time values — i.e. it’s not going to go off when you’re checking your blind spot, unless you’ve been checking it for over a certain length of time. It also has a silence button you can press for situations like looking around while you are parked. The proof of concept device was built using a Raspberry Pi, the PiCam, and a breadboard to accommodate some manual controls, the buzzer, and LEDs. It also continuously records video of you on a 30 second loop, and in the event of an accident, it saves all the video — perhaps proving it was your fault. Can you imagine if all cars had this installed? On the plus side you wouldn’t have to argue with insurance companies — but if it really was your fault, well then you’re straight out of luck.” (read more) 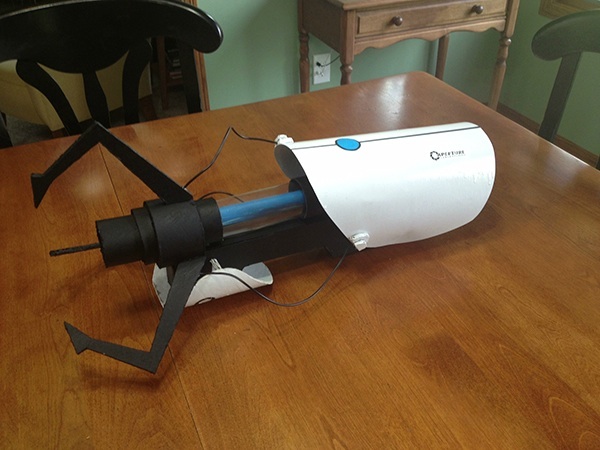 Every Chell costume needs a portal gun, and Redditor Pastlightspeed put one together on the cheap. She wanted to carry it during a 5K run, so it was also important that the weapon be lightweight. She put the gun together for less than ten dollars with cardboard. No excuses — you need one of these! (read more) 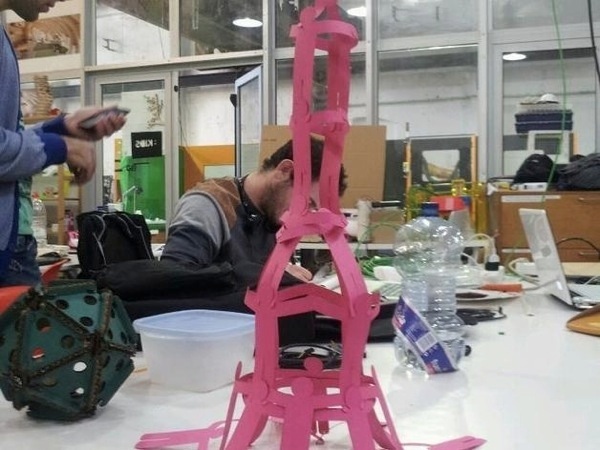 Lasercut Castell Construction Kit by vellab – Thingiverse Thing 240571: “‘Castell‘ is a human tower built traditionally in festivals at many locations within Catalonia. I’ve seen it several times in TV but watching it live in Barcelona was a totally astonishing experience. This is my version of homage to castellers.” (read more)

Sandy Noble shared a Polargraph project using an Adafruit Motor/Stepper/Servo shield for Arduino v2. kit! “The whole system is fairly technologically agnostic, but the current incarnation uses an Arduino microcontroller and an Adafruit Motorshield, along with a couple of stepper motors. The application that drives it from the computer is written in Processing. It decodes a bitmap and creates a map of the file using a polar coordinates system, recording pixel position, size and brightness. The hardware requests each pixel in turn, and renders it on the page using it’s own shading and movement algorithms.” (read more)

The G Ball from Argonaut Industries uses an Adafruit TRINKET, LSM303 & NeoPixels: “The G Ball is a Nerf-style soccer ball studded with lights which respond to the motion of the ball. When held in your hand, the lights are yellow on the top of the ball, green on the bottom, regardless of how you rotate the ball. When the ball is in free-fall (flying through the air, for instance), the lights turn blue. When the ball experiences a sudden acceleration (when being thrown or caught), the lights flash red.” (read more)

Awesome Halloween demon costume build — that is not, the demon assures us, very scary. (read more) 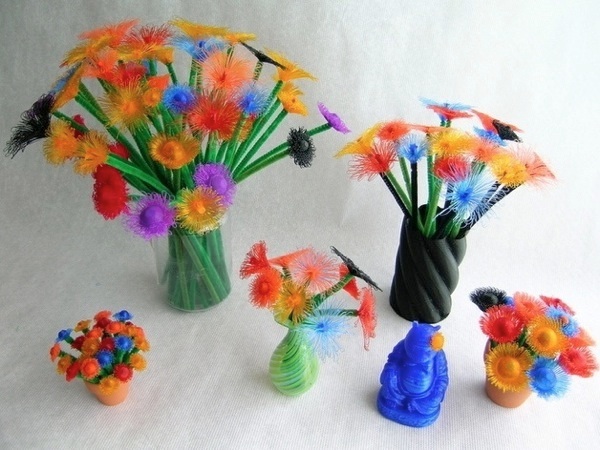 Customizable Super Flowers (drooloop flowers) by peetersm on Thingiverse as Thing 240158: “Make your own unique one-of-a-kind flowers with this openSCAD file! Print beautiful flowers as a gift for that special someone, or just to help decorate your world. They print fast and easy (see instructions). Get creative and incorporate flowers into other models or for fashion (see picture of the tie jewelry). The possibilities are HUGE – I have just scratched the surface and will upload my 9 favorite flowers.” (read more) 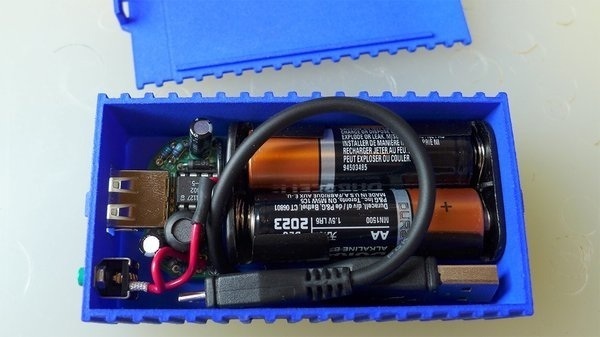 Sean Charlesworth shared his devotion to Adafruit and the Minty Boost kit through his excellent walkthrough tutorial for how he created a 3D printed enclosure for his kit: “I am a huge fan of Adafruit Industries, which was founded right here in NYC by MIT engineer, Limor ‘Ladyada’ Fried and is a supplier of great DIY electronics projects and an excellent source of information. Adafruit hand-picks quality electronic components, designs their own boards and kits and has an amazing tutorial section. I am no electronics wiz and have managed to put together some pretty cool stuff with their guidance. I love this place. One of Adafruit’s first kits was the MintyBoost USB charger which you solder together yourself, runs off of two AA batteries and fits in an Altoids mint tin. Throw one in your bag and they are super handy when you need an emergency phone charge. It’s worth the looks you get when plugging your phone into an Altoids tin. I’ve built five of these and from those builds thought of two improvements I wanted to make. The first problem was if the batteries were left in for an extended period of time they would eventually discharge to the point that they would leak and I killed two MintyBoosts this way. The second thing I wanted was enough room in the case to fit a small charge cable, so I decided to design and 3D print my own enclosure.” (read more)

Why did the Raspberry Pi click the link? To check out this detailed tutorial by mazzmn on how to make a joke machine that will leave you in stitches (ba-dum-ch): “I recently received a new Raspberry Pi and wanted to create an Intro to Raspberry Pi project. My Pi included a 16×2 LCD display and a Wi-Pi Card so I created the Wireless Raspberry Pi Powered Joke Machine. Just press the push-buttons and the machine will look up a one-liner and scroll through it. (Admission of guilt here…I originally thought it would be neat to create a desk-toy that could display inspiring and educational famous quotes…the Joke Machine can do this, but when I found I could just as easily generate one-liners, I decided that would be more fun 🙂 ) This Step by Step Instructable walks you through the process of setting up a new Raspberry Pi, adding the the PiFace Control and Display LCD, the WiPi wireless and the provided python script TheQuoteMachine.py which looks up jokes and quotes on a free service called iheartquotes.com. it’ll also describe how to access your Pi without need for a keyboard or Display using VNC remote access.” (read more)

Comments Off on Community Corner: Nerf-Friendly “Kill” Bot, Robotic Hand, Polarbots, Run of Soldering Luck, and More from this Past Week in Adafruit’s Community