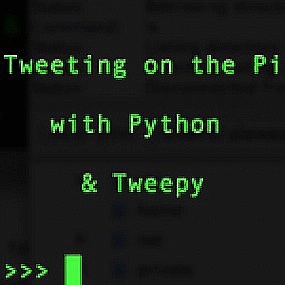 Tweeting with Python tweepy on the Raspberry Pi, from RasPi.TV:

In late October I started a series on Twitter and Python tweepy. Then it got pushed to one side by HDMIPi. But now I’ve managed to find some “recreational” time to play with tweepy a bit more.

Give Your App Permission to Write

Then make your app read/write. You won’t be able to tweet unless you give it permission to write. Newly created apps are read-only by default. Click on the settings tab and scroll down until you see this…

Install Tweepy (if you haven’t already)

Here’s how you install tweepy.

A lot of our code from last time can be re-used. But if you’ve created a new app, or changed the permissions on an old one, you might have to create new ‘Access tokens’….

Read the complete tutorial over are RasPi.TV….