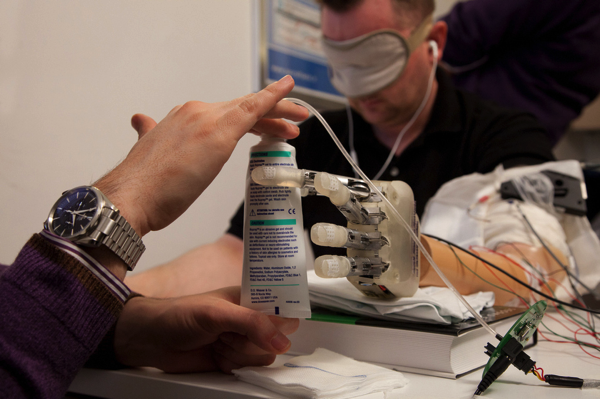 The Verge has the latest on prosthetics that can actually enable the wearer to feel the object they are holding.

The latest bionic hand can do a lot more than just let its wearer hold things: it can actually let them feel. By hooking into nerves in an amputee’s arm, the new prosthetic can let a person tell how hard or soft an object is and even distinguish its basic shape. “The sensory feedback was incredible,” Dennis Sørensen, who wore the hand during its first trial, says in a statement…

“What was amazing in the subject was the possibility to get — very quickly, almost immediately — the ability to use this restored sense of modality in an effective way,” Micera tells The Verge. Though health regulations limited Sørensen’s trial to only a month, by the final week he was able to differentiate between three shapes with 88 percent accuracy and between the hardness of three objects with 78.7 percent accuracy. “It is very intuitive,” Micera says.

Using the bionic hand required Sørensen to have electrodes implanted in his arm, just above where it had been amputated nine years prior. Even though the nerves hadn’t been in use, the prosthetic was able to translate the bionic hand’s input into electrical signals that the nerves could understand.

During the test, Sørensen was asked to differentiate and handle six different objects. For testing hardness, he was given a piece of wood, a stack of plastic glasses, and a pack of cotton. To test how well the prosthetic could relay the feeling of different shapes and sizes, Sørensen was given a bottle, a baseball, and a mandarin orange. Being able to differentiate between objects and hardness also let Sørensen more effectively control how much force the bionic hand exerted while holding different materials. 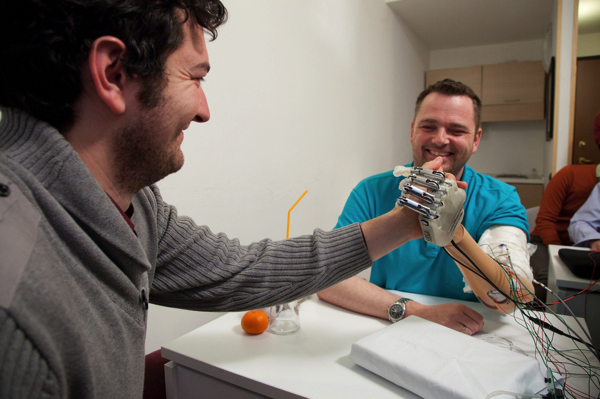 Filed under: robotics, wearables — by Jessica