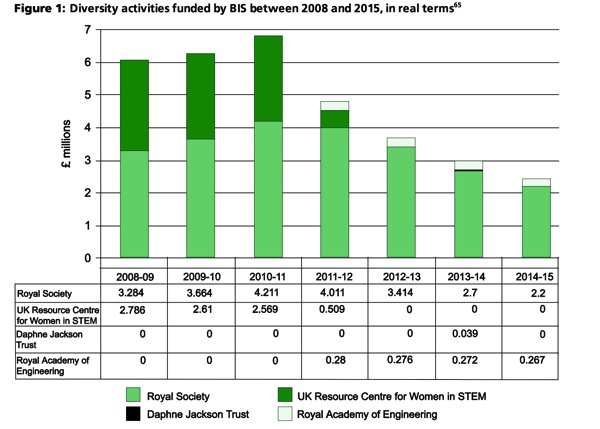 New report from the UK on women in scientific careers.

Many attempts have been made to improve the under-representation of women in science, technology, engineering and mathematics (STEM) careers in the UK. Yet currently only 17 per cent of STEM professors are women. It is astonishing that despite clear imperatives and multiple initiatives to improve diversity in STEM, women still remain under-represented at senior levels across every discipline. One compelling reason to tackle this problem is that the UK economy needs more STEM workers and we cannot meet the demand without increasing the numbers of women in STEM.

There is no single explanation for the lack of gender diversity in STEM; it is the result of perceptions and biases combined with the impracticalities of combining a career with family. Scientists often consider themselves to be objective and unbiased, yet studies have shown that scientists are susceptible to the same biases as the rest of the population.

Therefore we have recommended that diversity and equality training should be provided to all STEM undergraduate and postgraduate students. It should also be mandatory for all members of recruitment and promotion panels and line managers.

Early academic STEM careers are characterised by short term contracts, which are a barrier to job security and continuity of employment rights. This career stage coincides with the time when many women are considering starting families, and because women tend to be primary carers, they are more likely than men to end their STEM career at this stage. We call on the Government to work with the higher education sector to review the academic career structure and increase the number of longer-term positions for post-doctoral researchers. We have found that what benefits women benefits everyone in the STEM workplace.

Emphasis is often placed on inspiring young girls to choose science, which is commendable, but such efforts are wasted if women are subsequently disproportionately disadvantaged in scientific careers compared to men. The Government recognises the importance of gender diversity in STEM, but its efforts appeared to be largely focused on encouraging girls to study STEM, with little focus on enabling them to stay and progress in STEM careers. We were disappointed that BIS spending dedicated to improving diversity in STEM was virtually halved in the 2010 Spending Review and we recommend that the Government should monitor the effects of its policies on cutting and “mainstreaming” diversity funding.

Filed under: ald, science — by Jessica