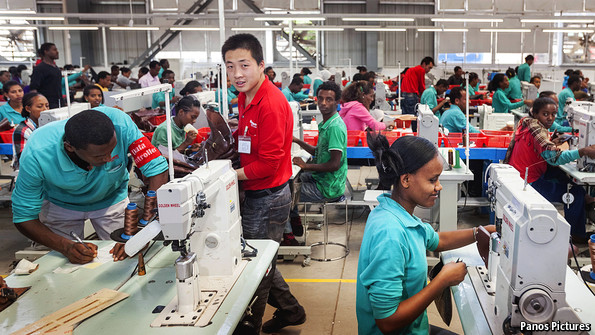 Those who cast doubt on Africa’s rise often point to the continent’s lack of manufacturing. Few countries, they argue, have escaped poverty without putting a lot of workers through factory gates. Rick Rowden, a sceptical development pundit, says, “Apart from a few tax havens, there is no country that has attained a high standard of living on the basis of services alone.”

Yet a quiet boom in manufacturing in Africa is already taking place. Farming and services are still dominant, backed by the export of commodities, but new industries are emerging in a lot of African countries.

Thandika Mkandawire, a Malawi-born expert, and Dani Rodrik, a Princeton economist, argue that growth is bound to fizzle because of a dearth of factories. But they may be too pessimistic. Manufacturing’s share of GDP in sub-Saharan Africa has held steady at 10-14% in recent years. Industrial output in what is now the world’s fastest-growing continent is expanding as quickly as the rest of the economy. The evidence, big and small, is everywhere.

H&M, a multinational Swedish retail-clothing firm, and Primark, an Ireland-based one, source a lot of material from Ethiopia. General Electric, an American conglomerate, is building a $250m plant in Nigeria to make electrical gear. Madecasse, a New York-based chocolatier, is looking for new hires to add to its 650 workers in Madagascar already turning raw cocoa into expensively wrapped milky and nutty bars. Mobius Motors, a Kenyan firm started a few years ago by Joel Jackson, a Briton, is building a cheap, durable car for rough roads.

Domestically owned manufacturing is growing, too. Seemhale Telecoms of South Africa is planning to make cheap mobile phones for the African market. Angola says it is to build its own arms industry, with help from Brazil. African craftsmen are making inroads in fashion. Ali Lamu makes handbags from recycled dhow sails on the Kenyan coast and sells them on Western websites.

Many of these businesses are beneficiaries of growth outside the manufacturing sector. The spread of big retail shops encourages light industry. In Zambia a surprising number of goods in South African-owned supermarkets are made locally; it is often too expensive to transport bulky stuff across borders.

A construction boom is fostering access to high-voltage power. The spread of mobile telephony, including mobile banking, helps small suppliers struggling with overheads. IBM, an American computer giant with an eye on Africa, goes so far as to say that “software is the manufacturing of the future”. Consumers will still want to buy hardware, but growing local demand is creating a market for African app and software developers.

Filed under: manufacturing — by Jessica