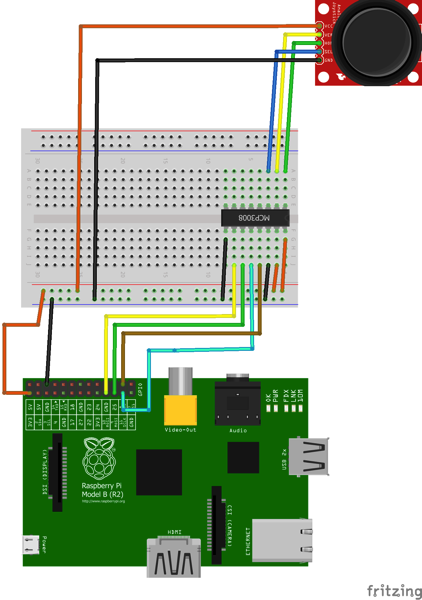 Carl Hughes has a nice little tutorial for hooking up an analog thumbstick to your raspberry pi.

For a while now I have wanted to try using analog inputs with my Raspberry Pi. The Pi hardware only supports digital inputs, but it is also capable of communicating with expansion chips using an interface called Serial Peripheral Interface (SPI) . I decided to try my hand at getting a ThumbStick from a GamePad to work They are available for a few pounds from ebay and so would not require me to destroy an existing console controller.

Some internet research pointed me in the direction of using a MCP3008 10 bit Digital to Analogue converter. The first guide I found for using one of these was on the Adafruit learning system and used something called Bit Banging, further research showed that later Pi do not need to do this and a guide on Raspberry Pi Spy gave me a starting point using a library called py-spidev. This lead to the below circuit diagram. The 2 direction (X & Y) signals are fed into the A/D converter. When the AD converter is queried by the python code a value between 0 and 1023 is returned representing the position of the stick ie 0 is extreme left, around 500 centre and 1023 extreme right.

The next part was to make my stick work like a joystick. I decided to have a play with PyGame (PyGame is installed as default on the Raspbian image) and see what I could come up with. At IWDEV 2 Gareth Williams gave a Introduction to Monogame and created a simply shooter based on an alien and his cat. Trying to recreate this in python on the Pi would provide me with a suitable test for my joystick.

Once this was working I started to create some code to act as a bridge between the A/D and the normal Joystick functions. Luckily this proved to just be a case of setting range of the A/D converter values when initialising the uniput library and then passing in the value received by querying the chip. I used a third analog channel for the switch activated by pressing down the stick but it should really be a digital GPIO input and I was being lazy.