The Mac9000 as a Photo Frame @Raspberry_Pi #piday #raspberrypi 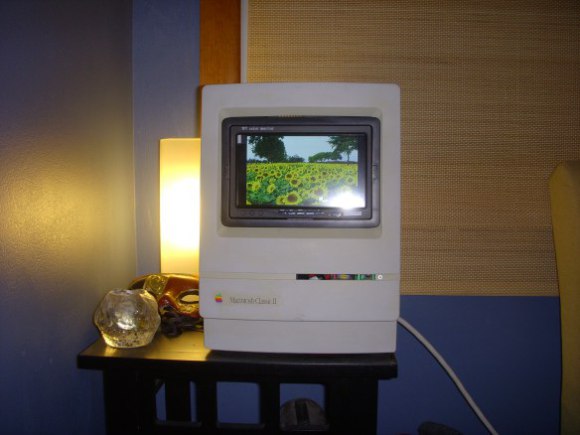 Rene turns Mac9000 into a photo frame that grabs pictures directly from his dropbox using a Raspberry Pi, Wifi adapter and an LCD. From hackaday.

Digital photo frames — as tacky as they may be — are a handy way to show off photos, especially considering how few photos get printed these days! [Rene] decided he could really use one at work, but he wanted it to look cool as well. Feeling a bit nostalgic with the 30th anniversary of the Macintosh Classic II, he decided to gut one and turn it into this awesome linux based “Mac9000″!

He started by picking up the Mac off eBay and cleaning it up a bit. It had definitely belonged to a school considering how worn it was. A bunch of sandpaper, bleach wipes, and elbow grease later, and it almost looks like new again! The next step was gutting the insides to make room for the new hardware. This is a bit tricky because you are dealing with high-voltage equipment! Make sure to discharge it safely before sticking your hands in!

Once the unit was empty, he began upgrading it with some more recent technology. A 7″ LCD, a Raspberry Pi (with PIR sensor), and a WiFi adapter to name a few. In addition to his blog, he also has a great photo gallery of the entire process over at LYTRO. He’s set up Raspbian “Wheezy” to automatically snag photos off of a DropBox directory, making this one of the easiest to use photo frames we’ve ever seen. He also plans to show videos on it, but alas, that is a project for another day.

Filed under: Raspberry Pi — by Kelly