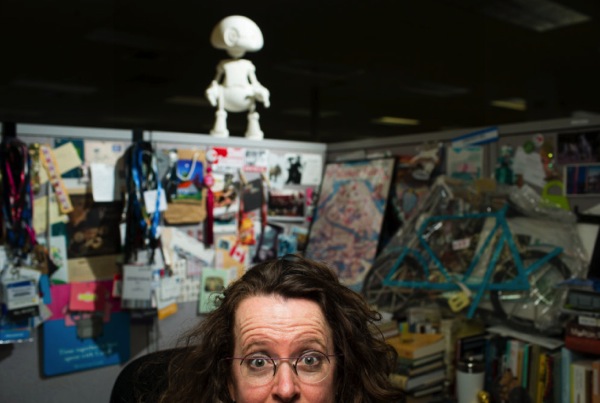 The New York Times has an interesting post about Genevieve Bell, a social scientist at Intel.

Dr. Bell’s title at Intel, the world’s largest producer of semiconductors, is director of user experience research at Intel Labs, the company’s research arm. She runs a skunk works of some 100 social scientists and designers who travel the globe, observing how people use technology in their homes and in public. The team’s findings help inform the company’s product development process, and are also often shared with the laptop makers, automakers and other companies that embed Intel processors in their goods.

Some years ago, for instance, Dr. Bell’s team interviewed parents in China who regarded home computers as distractions from their children’s school work. Intel developed a prototype “China Home Learning PC,” eventually manufactured by an Intel customer, with a key that parents could activate to prevent their children from playing online games during homework time.

“My mandate at Intel has always been to bring the stories of everyone outside the building inside the building — and make them count,” says Dr. Bell, who considers herself among the outsiders. “You have to understand people to build the next generation of technology.”

…In a corporate culture engendered by male engineers, and still dominated by them, Dr. Bell sees flaunting her otherness as part of the job description.

“Some things I do quite deliberately,” she told me. “I wear French perfume. I wear heels. I dress like I am actually female.”

Sixteen years after Dr. Bell, now 46, arrived at Intel, she continues to nudge, contradict and challenge perceptions. But now she leads her own research enterprise. Still, it can be hard to describe precisely what Dr. Bell herself does, because she tends to favor open-ended research questions that don’t have an immediately obvious practical payoff. Newspaper articles — with headlines like “Technology’s Foremost Fortune Teller” — have portrayed her as an oracle with magical predictive powers.

But over several months of conversations, I came to think of her more as Intel’s in-house foil, the company contrarian, an irritant in an industrial oyster shell.