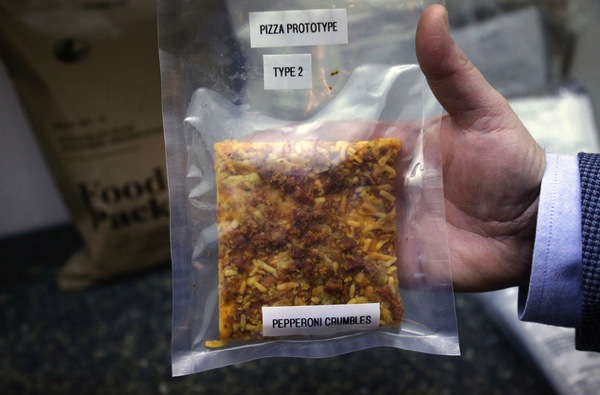 Not sure how appetizing this is but it’s an idea! Via The Verge.

Military researchers believe they’re close to reaching one of the most sought-after rations ever: a pizza that can be left out for years without spoiling. The AP reports that food scientists at the US Army Natick Soldier Research, Development and Engineering Center in Massachusetts are testing a prototype pizza to include in military meals ready to eat, or MREs. Pizza is frequently requested by soldiers, but the combination of sauce, cheese, and dough quickly becomes a breeding ground for bacteria as moisture from other ingredients turns the crust soggy. The solution was twofold: keep the water in place, and make the whole pie hostile to bacteria.

To stop the dough from going soft, scientists used a type of preservative known as humectants, which include various kinds of gels and sugars (honey is sometimes used as one.) Humectants keep food moist by binding to water; in this case, they lock it into the rest of the ingredients. The pizza’s acidity is also adjusted to make it less hospitable to bacteria, and iron filings in the package help absorb any air that gets into the packet. The result? “You can basically take the pizza, leave it on the counter, packaged, for three years and it’d still be edible.”

Edible and palatable, however, are two different things. Lab director Jill Bates and spokesperson David Accetta both say they’ve tried it and liked it, comparing it to a ready-made pizza that just happens to last at 80 degrees Fahrenheit for years. “It pretty much tastes just like a typical pan pizza that you would make at home and take out of the oven or the toaster oven,” says Bates. It’s not clear when exactly soldiers will see the new rations, but the AP reports that they’re “closing in” after almost two years of research.