Moss FM is the world’s first totally plant powered radio.  Developed by Swiss engineer Fabienne Felder in collaboration with Cambridge University scientists Dr. Paolo Bombelli and Ross Dennis, Moss FM works using an aesthetically pleasing lineup of moss plants as a “Photo Microbial Fuel Cell.”  The fuel cell acts as a sort of biological solar panel and harvests electrons produced from the photosynthesis of the moss and converts them into electricity, even when no light is available. 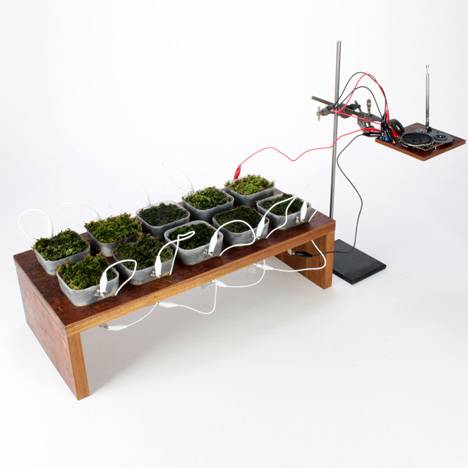 In order to grow, plants photosynthesise – they use solar energy to convert water and carbon dioxide into sugars. The photosynthetic process, in simple terms, consists of two stages. In the first, light-dependent stage, plants split water – oxygen is released and electrons and protons are produced. In the second, light-independent stage, plants then ingest carbon dioxide to convert those electrons and protons into sugars.

Now, here’s why mosses operate as potentially better photo-active components in Photo-MFCs than other plants: Mosses are as efficient in the first stage of photosynthesis as other plants. But they grow slowly, which means they are less efficient at converting the produced electrons and protons into sugars in the second stage – leaving us with bigger potential to collect and transform electrons into electrical current.

The researchers acknowledge that this type of technology is still in its infancy and the total amount of harvested energy is limited, but hope to develop it further to increase its efficiency for larger scale use. As Felder notes, the impact of this sustainable energy source has some significant potential.

If 25% of Londoners (ca. 2.7 million people) charged their mobile phone on average for 2 hours every other day with moss, we would save enough electricity to power a small town: 42.5 million kWh, amounting to a saving of £6.81 Million and 39632 Tons of CO2* a year. These are interesting values, given the huge amounts of electricity that are wasted during generation and transmission, for example. And even more interesting, if we consider that at the moment we capture only about 0.1% of the electrons the mosses potentially produce.