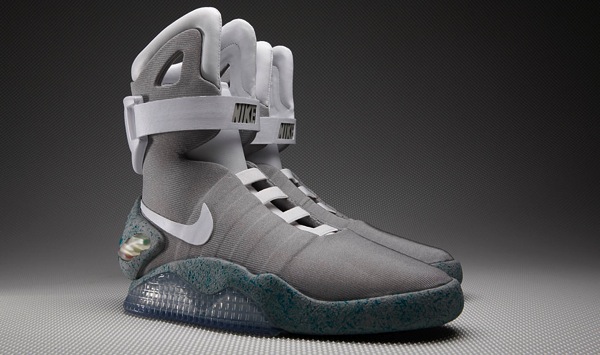 Power Lace’s like Marty McFly’s from Back to the Future II will soon be a reality, from sole collector.

There are sneaker releases, and then there was the Nike MAG launch in 2011. Without as much as a hint, Nike produced Marty McFly’s fictional high-top from Back to the Future II and auctioned off 1,500 pairs on eBay, with all proceeds going to the Michael J. Fox Foundation for Parkinson’s Research. In the end, sneakerheads, film aficionados and celebrities spent nearly $6 million to claim a piece of history.

However, as transcendent as the launch was, something was missing. When McFly wore his pair in the movie, they were equipped with power laces. While Nike went above and beyond to put the release together, they weren’t quite ready for the futuristic lacing system. But why should they have been? MAGs technically weren’t a reality until 2015, which is now less than a year away.

During an appearance at the Jordan Brand’s Flight Lab space in New Orleans earlier today, designer Tinker Hatfield was asked about the possibility of seeing power lacing next year, and his answer may surprise you.

So there you have it. The man himself confirming that we will be seeing power laces again in 2015.

But will they be the actual Nike MAG, or instead a new model that self-laces? We’ll have to wait and see….

Filed under: wearables — by Kelly