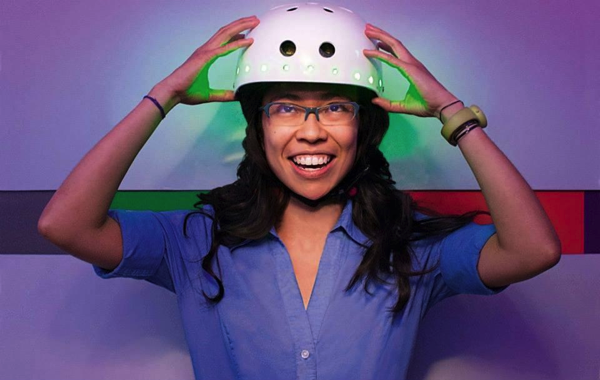 Biking reduces stress. That is, until you hit the pavement and start weaving in and out of traffic, pedaling alongside cars, trucks and a string of crowded buses. City cycling is an unnerving experience — one that’s bound to leave you perpetually paranoid you’ll be pummeled by the poorly-planned opening of a car door.

Arlene Ducao, a recent MIT Media Lab graduate, has felt a similar anxiety biking around New York City. To stay safe, she smartly straps on a helmet. Not just any helmet, however; one that reads minds.

Ducao has been working with Ilias Koen, whom she met at New York City’s School of Visual Arts. Together, they’ve spent the last decade focused on scientific data visualization, all while tricking out their bike helmets, rather recreationally, with different caps and lights to make it more visible.

MindRider is a helmet that’s undergone several “rounds.” The first? Translating the cyclist’s brain state to different colors on the helmet, similar to traffic lighting. Green is equivalent to calm and focus, while yellow represents slight agitation, and red equates to stress and a blinking red light symbolizes panic. The coloring is a way to present bikers’ mental state on the streets, according to Koen, although that’s just one way stress can be used.

The helmet is also capable of developing “Experience Maps” of cyclists’ geo-located brain activity. With these maps, MindRider is able to analyze relationships between the user and the environment, and assist other riders in charting a safer course.

“The data access of MindRider has evolved into something more useful for them,” said Ducao of the startup’s initial cyclists. “They could look up a map of all the users and all of the brain states and use that to plan their route.”

Knowing where you get stressed and others get stressed isn’t just helpful personally, however. The feature can also aid municipal government organizations looking to more effectively plan out bike lanes in their city. All data is customized to a user’s privacy settings, yet MindRider encourages cyclists to “add to street maps that show [their] community’s experience” and “share them with friends, other cyclists, even transportation planners.”

Filed under: wearables — by Jessica