Community Corner: Great Projects the Past Week in the Adafruit Community – Feb 21st, 2014

Jeff Highsmith sent us this kind message about his project posted on MAKE for an Apollo Program-Style Mission Control Desk Blinking with Adafruit Buttons and Parts!

When Adafruit started offering a free Raspberry Pi with orders over $350, I thought I’d never be able to justify ordering that many components at once. I asked myself, “what could I possibly even do with $350 worth of switches, LEDs, breakout boards, etc?” Months later, I dreamed up a project big enough in scale that I not only crossed the free Pi threshold, but I had a blast building and learned a ton in the process. I built a homework desk for my son that flips up to reveal a Mission Control style console built from a big box of Adafruit parts, among other things. I thank you for the excellent selection and service, and I thank John De Cristofaro for his terrific guide to photographing LEDs, which helped me show off the 12-segment bargraphs to their full awesomeness. Incidentally, I did the build right at the tail end of the bargraph availability, and didn’t order enough in time, so if you see the blank spot in my INCO panel, it will soon be filled when I order another pair of those cuties. Thanks for bringing them back, I’m intrigued to try the i2c controller with them.

Read details of each of the sections of the control board here! We are a bit obessessed…

There are people making amazing things around the world, are you one of them? Join the 75,193 strong! And check out scores of projects they shared this week after the jump!

Benjamin Gray of phenoptix shared: “”Jonnanes of the Nuernberg Fablab has created the plotclock. The plot clock is built from 3mm Acrylic or can be 3D printed and consists of three 9g servos controlled by an Arduino Uno. Two servos control the arms that hold the pen and the third lifts the arms and therefor pen from the surface. The files for the machine can be found on thingiverse along with the code, the code is also in GitHub so it’s double OpenSource. The Build instructions are available on the Fablab site as linked in the first sentence of this paragraph. After some tinkering and breaking of parts we’ve got it together. No joy on the wiper part yet but it’s a work in progress. All of the parts we broke we redesigned a little so clumsy people like our good selves don’t snap them too. This was mainly increasing hole sizes slighty so self tapping can be used, which actually makes the build super easy. There’s an edit to the left and right arms too, where they attach to the servo, making it easier to attach. All of the edits have been uploaded and cross referenced on Thingiverse” (read more) 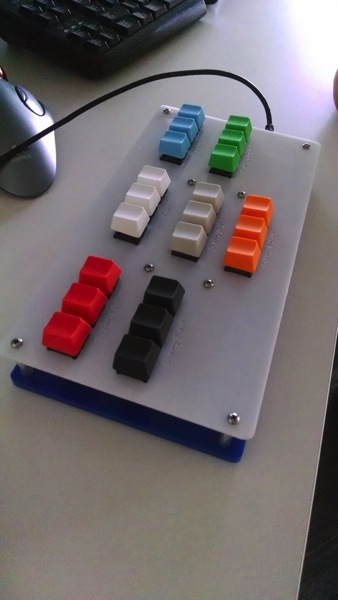 Edward Eigerman shared: “My latest project. It’s a sampler keyboard. Each bank of three keys uses a different Cherry MX switch, red, clear, blue, black, grey, green and brown. It does actually function as a keyboard, though there are only 21 keys so it doesn’t type anything useful. ” (read more) 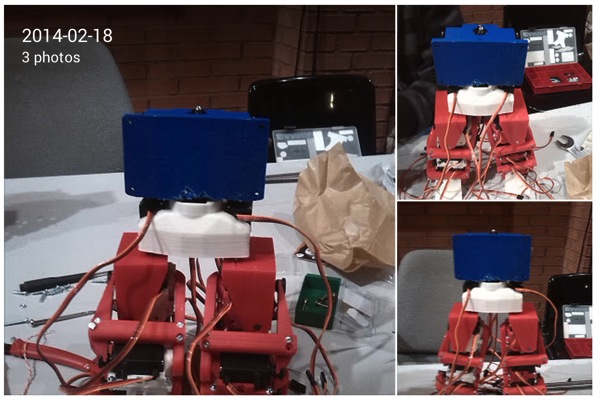 Luis G III. shared: “A few weeks ago I asked for feedback on my robot design ^^, some of you said it looked like a monkey, others like a box and one really funny said it was like a mail-box-polaroid-camera (that really made me laugh)
Well, I just want to show how it’s evolving and now the body has the robotic trunk attached (yes, it was an elephant haha) So, let me know what do you think now 🙂 Thank you!﻿” (read more) 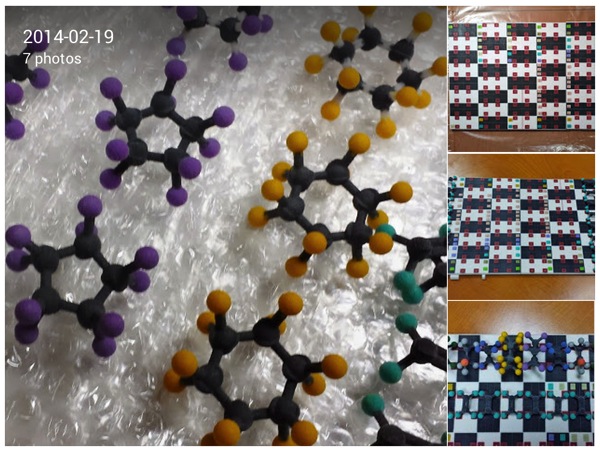 Sebastian Hirsch shared: “The dream of ultrasonic vision is about as old as mankind (± a couple of years, approximately). Thus far, spatial perception based on emission and reception of short bursts of sound has been a privilege of bats, cetaceans, submariners and physicians. However, with the advent of Arduino and affordable electronic components, it’s time to stop dreaming and to start building! This post details the construction of a scanning ultrasonic rangefinder driven by an Arduino Uno and held together by some Märklin magic. In the second part, selected details of imaging in general and medical ultrasound imaging will be discussed.” (read more)

Jeff O’Shannessy shared: “Here’s a video of the staff I showed off earlier on ‘Show and tell’.﻿” (read more)

Eduardo Zola shared with us his Realtime Typing to POV Rig: “POV as you type (a typewriter way to write on a POV unit in real time). A real time way to send characters and write on a Persistence of Vision unit. Type in a computer keyboard, and send the characters via RF 433 Mhz to the POV unit, in real time.” (read more)

Cosmo Wenman shared his state-of-the-field LACMA Art+Technology Lab Presentation: The Archetypes Burst In, Illustrated: “LACMA hired me to give their new Art + Technology Lab its very first presentation, on February 3, 2014. It was a private presentation to approximately fifty of LACMA’s staff, including curators, asset managers, and fundraisers, though at my request they allowed me to invite a journalist. …The arrangement above was intended as a still-life depicting plenitude–abundance and variety. It’s what I set up to illustrate some of my thoughts on 3D printing, 3D capture, and new opportunities for museums in their role as custodians of design.” (read more) 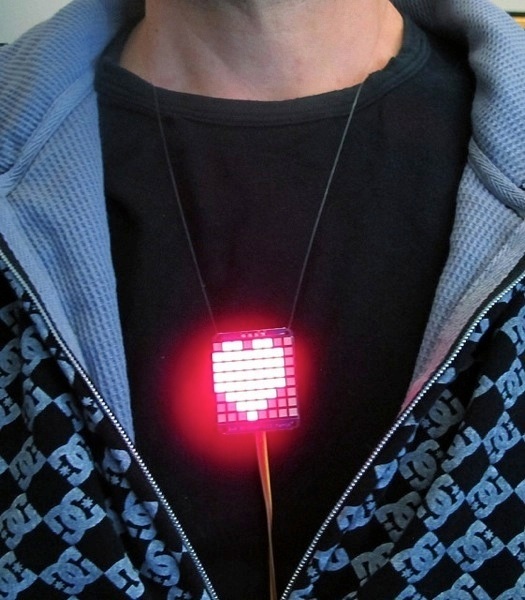 Chen Lu shared an LED edge lighting project using Adafruit NeoPixels: 2.5D Edge Lighting Pixel LED Cube, on Instructables: “These fancy cubes blew my mind when the first time I saw them. I knew I want to build one instantly. After some online research and messed with radioshack kit for a while. I feel it is not a easy job for me to build a big(at least 6x6x6) single color LED cube, let alone the cool RGB I want. You need pretty good soldering skills to make it work and looks nice. A lot of wiring and complicated coding. Don’t be discouraged by me though, there are good enough tutorials for you to go through. And some practice can make perfection. I just don’t have enough time and effort to build this ultimate LED challenge(for me). I just want to build something nice before my girlfriend’s birthday(not a whole lot time), as a gift.”
(read more) 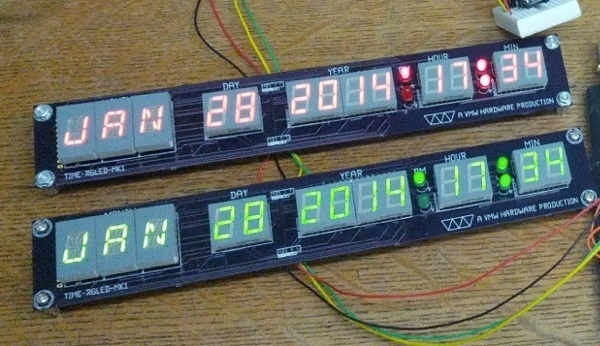 From the Forums: LED Time Circuits from “Back to the Future”: “I know it’s a common project, but I thought I’d make my own Raspberry-Pi powered Time Circuits, looking similar to those seen in the Back to the Future movies. The goal is to have three calendar/clock displays (red/green/yellow) that you can set via a keypad. The displays will each have 3 16-segment alphanumeric displays for the month, then 7-segment displays for date/year/hour/minute.” (read more)

Trinket Vader chest box in the Adafruit Forums: “So i just created my first project using the trinket 3v version. I bought it for this project specifically and i completed it in two days. I’m a member of the 501st Legion (a worldwide star wars costuming organization) and we make screen accurate costumes. One of the challenges we have is getting the props to look right, specially lights and sounds. This is where I found lots of potential for the trinket, it has enough memory for simple programs that do not require more than 5 io’s etc.” (read more) 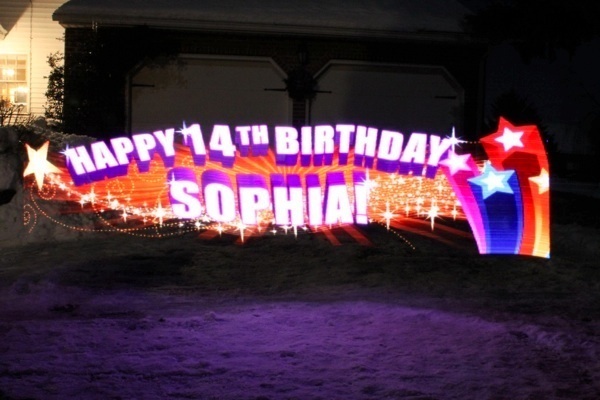 iBucky shared an excellent birthday light painting created using the Adafruit NeoPixel Painter tutorial on the Adafruit Forums! “I recently built the NeoPixel Painter and want to say that tutorial was great. I had no issues putting mine together. I made one modification, I used a 1 x 3/4″ x 42″ piece of wood which I routed out a groove for the NeoPixel strip to fit in flush to remove side light from the LEDs. We had a blast with it over the weekend at my daughter’s birthday party, see sample below. In addition to the birthday wish banner we used it for a magical animal that appeared in the air to answer questions for a scavenger hunt. We anticipate more animals and objects to appear in the air in time!” (read more) 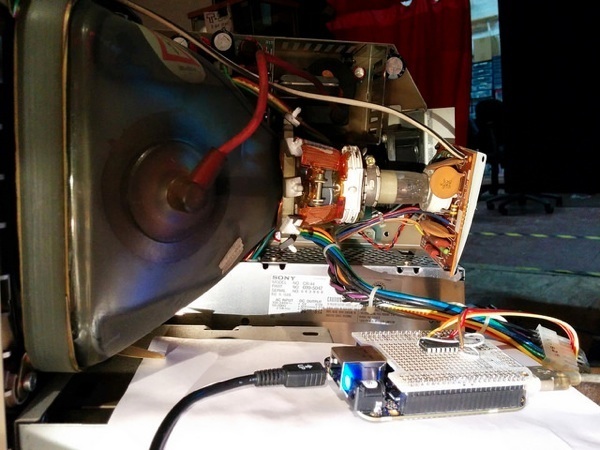 Trammell Hudson’s 30th Anniversary Macintosh Running on BBB: “…It is a truth, universally acknowledged, that an engineer in possession of an antique computer must be in want of hacking it. Last year I reverse engineered the Easter Egg photographs from a Mac SE that I found on the side of the road and that machine has been sitting idle since then, so I took inspiration from NYCR founder Dave Clausen’s six year old 24th anniversary Mac project and turned my old SE into a “30th anniversary Macintosh” with a new ARM motherboard running Linux. Unlike Dave, I was able to interface with the original 9″ CRT thanks to the programmable hardware in the Beaglebone Black.” (read more)

Comments Off on Community Corner: Great Projects the Past Week in the Adafruit Community – Feb 21st, 2014