Getting started with Raspberry Pi. via cnet

The credit card-size Raspberry Pi microcomputer has been one of the most talked-about devices since it first hit the scene in early 2012. Originally intended to teach students about computer science, the device has sold more than 2 million units and has become a must-have for tech hobbyists.
The Raspberry Pi can be used for a variety of do-it-yourself projects. Enthusiasts have built it into a media-streaming platform, a home automation hub, or even a retro game console, among other things.
Here’s what you need to know about this inexpensive device:
Unboxing
The Raspberry Pi isn’t like any computer you’ve purchased before. It’s very bare-bones, there is no casing, no fans, no power switch, no power supply, and no hard drive. You are essentially buying a small motherboard with a system-on-a-chip, which includes the processor, graphics card, and memory in a single package.

The device is powered by a low-power single-core ARM processor clocked at 700 MHz. For comparison purposes, the iPhone 5S features a 1.3GHz dual-core CPU and the Galaxy S4 includes a quad-core 1.6 GHz Snapdragon 600 processor.
A monitor can be connected through HDMI or an RCA connector, while a mouse and keyboard are connected through USB. There is also a 3.5mm headphone jack, a Micro-USB port, which is used to power the device, and an SD card slot for storage.

The entry-level Raspberry Pi, known as the Model A, is equipped with 256MB of RAM, a single USB port, and doesn’t have an Ethernet port, while the $35 Model B has double the RAM (512MB) and an additional USB ports. The more expensive model also has a built in 10/100 wired Ethernet. Model A owners will have to rely on a USB wireless card for Internet connection.
I recommend the Model B, you get more ports and more memory for only $10 extra.
Requirements
The Raspberry Pi Foundation, the group behind the device, recommends using a Micro-USB power supply from a reputable company that can produce 1.2A (1,200mA) at 5V. The Model B uses between 700mA and 1,000mA depending on the components you connect, while the Model A is rated around 500mA. 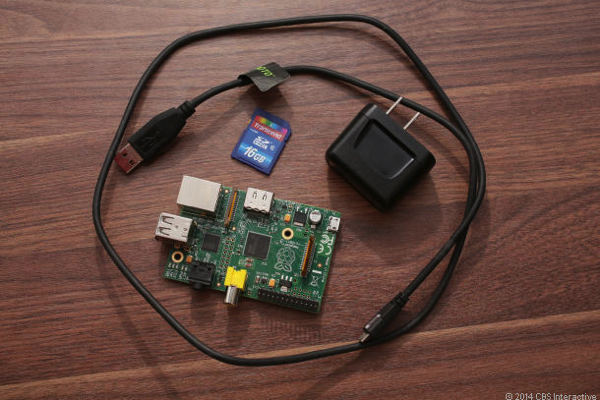 For this guide, however, a power supply with an output of 700mA at 5V should be more than enough. Most Android, BlackBerry, and Windows Phone chargers should do the job. I’m using an old Motorola charger that is capable of producing 850mA at 5.1V.
You will also need an SD card for storage and some sort of SD card reader — my MacBook Air has an SD card slot that I will be using. The minimum supported size is 4GB with a speed rating of at least class 4, but the Raspberry Pi supports cards with up to 32GB of space and a class 10 speed rating.

Lastly, you will need a monitor, an HDMI cable, a USB mouse and keyboard, and an Internet connection. Model A owners will be required to use a USB hub for connecting additional USB peripherals: the keyboard, mouse, and wireless card.
Installing an operating system
The Raspberry Pi Foundation has created a new tool that takes out the complexity of installing an operating system on the Raspberry Pi. The New Out Of Box Software, appropriately known as NOOBS, can be downloaded as either a ZIP file or a torrent from the Raspberry Pi Web site.

While the file is downloading, your SD card must be formatted; this will erase everything on the card. The easiest method for formatting the card is to download thefrom the SD Card Association’s official tool, which is available for both Windows and OS X computers.
Once the NOOBS file has finished downloading, unzip it, extract the files to the root of your SD card, and safely eject it from the computer. Next, connect the mouse and keyboard to the USB ports, the monitor to the HDMI, the Ethernet cable, and the SD card, which can be inserted in the slot on the back of the device. With all the components in place it is now time to connect the micro-USB power cord, which will automatically turn the Raspberry Pi on.

Read more for tutorial on how to install an operating system