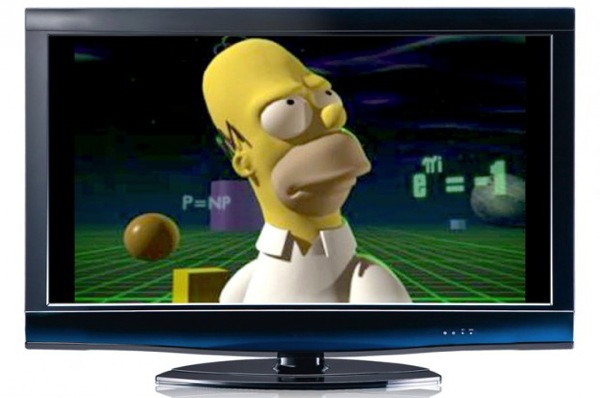 Homer Simpson taught us a lot about advanced math. via Salon

The first “Treehouse of Horror” episode appeared in the second season of “The Simpsons,” and since then they have become an annual Halloween tradition. These special episodes usually consist of three short stories that are allowed to break the conventions of life in Springfield, with storylines that can include anything from aliens to zombies.

The storyline begins quite innocently with Patty and Selma, Homer’s sisters-in-law, paying a surprise visit to the Simpsons. Keen to avoid them, Homer hides behind a bookcase, where he encounters a mysterious portal that seems to lead into another universe. As the dulcet tones of Patty and Selma get louder, Homer hears that they want everyone to help clean and organize their collection of seashells. In desperation, he dives through the portal, leaving behind his two-dimensional Springfield environment and entering an incredible three-dimensional world. Homer is utterly perplexed by his new extra dimensionality and notices something shocking: “What’s going on here? I’m so bulgy. My stomach sticks way out in front.”

Instead of being drawn in the classic flat-animation style of “The Simpsons,” scenes set in this higher dimension have a sophisticated three-dimensional appearance. In fact, these scenes were generated using cutting-edge computer animation techniques, and the cost of generating them, even though they lasted less than five minutes, was far beyond the budget of an entire normal episode. Fortunately, a company named Pacific Data Images (PDI) volunteered its services, because it realized that “The Simpsons” would provide a global platform for showcasing its technology. Indeed, PDI signed a deal with DreamWorks later that year which led directly to the production of “Antz” and “Shrek,” thereby kick-starting a revolution in film animation.

Comments Off on Homer Simpson Teaches Us About Advanced Math #SaturdayMorningCartoons