Data stored on today’s CDs and DVDs has a lifetime of several decades before the physical material begins to significantly decay. Researchers are working on prolonging the lifetime of stored data, but so far reaching even 100 years has been challenging. Now in a new study, researchers have demonstrated a data storage technique that has a lifetime of about 3 x 1020 years at room temperature—virtually unlimited—which could lead to a new era of eternal data archiving.

The researchers, Jingyu Zhang, Mindaugas Gecevičius, Martynas Beresna, and Peter G. Kazansky at the University of Southampton in the UK, have published a paper in a recent issue of Physical Review Letters on the new data storage technique.

As the scientists explain, there is a general tradeoff in data storage between lifetime and capacity, so that media that store larger amounts of information tend to have shorter lifetimes. For example, physicists have demonstrated the possibility of storing vast amounts of data with individual atoms, yet the storage time is a mere 10 picoseconds at room temperature.

The new optical data storage technique presented here provides both excellent lifetime and capacity. To record data, a femtosecond (fs) laser delivers ultrashort (280-fs, with 1 fs = 10-15 seconds) light pulses onto a piece of quartz. The light pulses create nanogratings—tiny dots—in the quartz, with each dot carrying three bits of information. This triple storage is possible because the laser performs multilevel encoding, so that the dots encode the intensity and polarization of the light in three layers of the quartz. Applying this technique, a disc the size of a CD or DVD with about 1000 layers has a data capacity of hundreds of terabytes, compared with hundreds of megabytes for today’s commercial discs.

To determine the lifetime of the optical data storage system, the researchers subjected the information to accelerated aging to obtain the decay rate. The underlying mechanism of decay is the collapse of nanovoids that exist between the nanogratings; when the nanovoids collapse, the nanogratings become unstable and lose their stored data.

The researchers calculated that the decay time of the nanogratings, and thus the lifetime of the data storage system, is about 3 x 1020 years at room temperature, indicating unprecedented high stability. The lifetime decreases at elevated temperatures, but even at temperatures of 462 K (189° C, 372° F), the extrapolated decay time is 13.8 billion years, comparable to the age of the Universe. 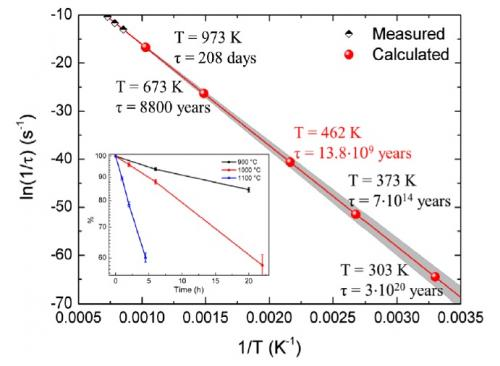