Boarding and Science meet at the Skate Park #makereducation 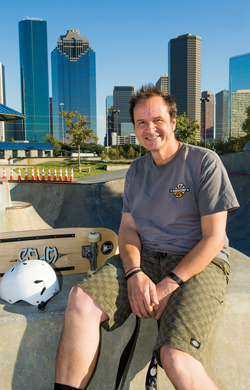 Rice Professor Adrian Lenardic used an accelerometer to take various measurements while skateboarding at the local skate park and, unsurprisingly, the kids around him grew interested, via phys.org:

Lenardic’s return to skateboarding was still three years away when a sequence of events began that would eventually blend the sport with his profession as a scientist. “In 2005, I wrote a CAREER grant to the National Science Foundation,” he said. “The CAREER grant asks you to define research projects that might span a career, but they know that you are an educator, so they also want you to think about ways to integrate your research into the classroom.”

Lenardic’s grant enabled him to create a visualization studio that can be used not only for university research and teaching, but also by K–12 students and educators, artists, and science communicators. Part of the program involves building a computer model that simulates geologic processes such as plate tectonics, surface erosion, continental collisions and planetary cooling. Another element is the creation of a workshop where advanced undergraduate and graduate students develop hands-on demonstrations of key concepts in geoscience.

“That can be drawing a picture or building a scale model you can put on a table,” Lenardic said. He hopes the program will encourage students to see beyond artificial boundaries within subfields and gain a greater understanding of how scientific processes are interconnected.

As Lenardic continued tinkering, building things and taking measurements, he acquired equipment to collect on-the-fly data, such as an accelerometer, a Doppler radar unit and strain gauges. About two years ago, thinking about his newly reinvigorated hobby of skateboarding, Lenardic took his measuring gear to the skatepark. “As a curious and nerdy scientist, I brought the stuff out to measure myself,” he said. “I just wanted to see how efficiently I was skating.”

Some of the equipment, such as an accelerometer, was strapped to his body, while others, such as the Doppler radar unit, were set up on stands and aimed at him as he sped down the ramps or up and around the curves of the swimming pool-like bowls.