Get Your Kicks with LEDs #WearableWednesday 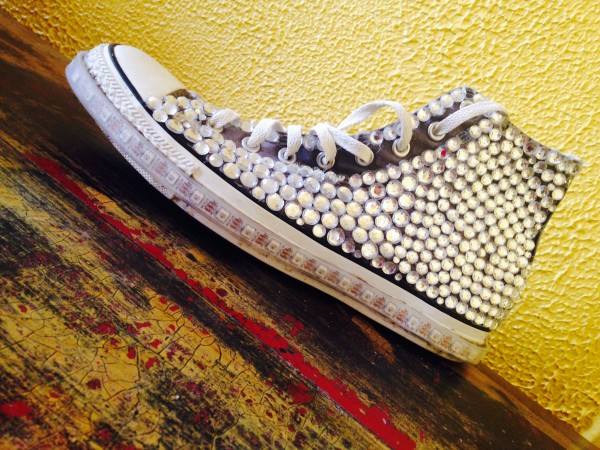 Sam Baumel was faced with a challenge — design a pair of kicks for his cousin’s wedding. Being a lover of the moving image, he decided to make a shoe that would embody his passion.

The groomsmen were told to pick a theme (like robots or superheroes) for their Converse All-Star High Tops. My theme?…SHINE BRIGHT LIKE A DIAMOND. The gem-encrusted Converse spit light in circles from heel to toe with each step, hop and twerk. I danced the night bright with sequins on my socks and LED cuff link accents.

You can check out Sam’s craftsmanship, as well as his love of fun graphics (Spoiler Alert), in this video.

When asked about his genius, Sam admitted that the shoes were an Adafruit inspiration.

The shoes are modeled off the Adafruit Learning System, but I added some of my own rhinestone flare. An earlier prototype was built for Burning Man using EL Tape, velcro and traditional force resistors. Those force resistors sent a few too many electrical shocks to the heel 🙁 Adafruit’s suggestion of using Velostat and LED strips worked MUCH better 🙂

We have to agree he has dazzling talents, especially patience in attaching all of those rhinestones. In the end, it’s worth it to be seen on a dance floor in an original creation. Are you ready for the wearable tech movement? Get your kicks out of our tutorial.

Comments Off on Get Your Kicks with LEDs #WearableWednesday