Cities in motion: how slime mold can redraw our rail and road maps

Most people see slime mold and think “gross”. But researchers have discovered a new use for the substance- urban planning. Via The Guardian.

When asked, slime mould would reroute the M6. For years now, researchers in the field of urban transport have looked at biomimicry as a tool for establishing the most efficient routes around congested cities, typically by road or rail.

The use of naturally occurring living organisms to solve spatial design problems has, in this area, variously been explored by mimicking the foraging process of ants or the growth of crystal structures. But it is a particular form of slime mould, Physarum polycephalum (the “many-headed slime”), that has shown particular promise, having been applied to cities around the world and now offering the potential for mimicking regularly occurring events, such as rush hours.

P polycephalum is a plasmodial, single-celled organism which grows outward from a single point, searching for food sources. Once these have been located, the many branches it has sent out die back, leaving only the most efficient route between food source nodes.

By arranging pieces of oatmeal on a Petri dish to represent railway stations, researchers at the University of Hokkaido in Japan successfully grew a slime mould model of the Tokyo rail system in 2010. Since then, slime has mapped the optimum transport networks of numerous cities, as well as the Silk Road and a full global trade route.

In a comparison of 14 countries’ motorway networks, a global team of researchers led by Professor Andrew Adamatzky – director of the unconventional computing centre at the University of the West of England – used oat flakes and slime to establish that cities in Belgium, Canada and China had existing transport networks most similar to the slime model, and thus were most efficient, while networks in the US and Africa were indicated to be the least efficient. 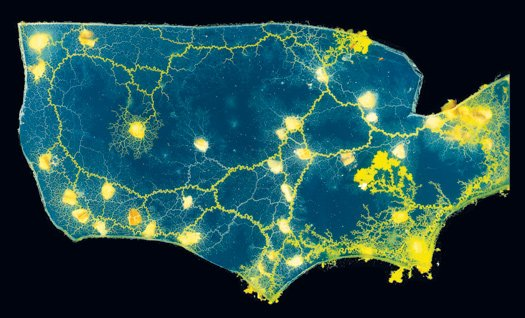 Comments Off on Cities in motion: how slime mold can redraw our rail and road maps