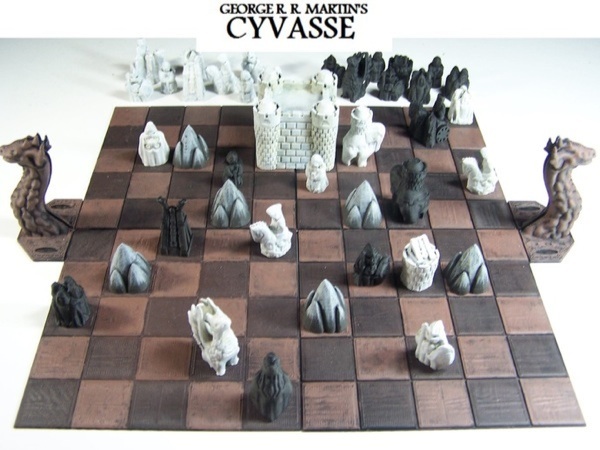 Guest curator Zheng3 has this to say about 3D printed chess sets:

So very many chess sets: Despite international treaties against classic boardgame proliferation, hobbyist 3D printing has unleashed a torrent of chess and chess-like sets. Arian Croft (with an assist from friend and George R.R. Martin scholar Nate Stephens) shows up on my list of faces again with his Cyvasse set.

Of all the chess sets I’ve seen in the last few years, this one (below) gets my vote for most likely to be printed at Zheng Labs: MICRO PLANTER CHESS SET.

This is my attempt to translate the chess-like game featured in George R. R. Martin’s A Song of Ice and Fire novels (Game of Thrones). Being a huge fan of the man and his work, I wanted to try and give his game the best translation I could. Working with my good friend (and studious Martin scholar) Nate Stephens, I adapted the game to include everything mentioned in the book into a rules set I found believable for a game made during the emulated time period, while also keeping the games in mind that Martin has mentioned as inspiration during interviews. So, Let me know if you get to printing/playing it, and if you have any suggestions for rules adjustments, variants, etc, post in the comments below and let’s get a dialogue going. The rules PDF is with the other downloads, and its a light read (2 pages). Game on! (Read More.)

The Micro Planter Chess Set is loosely based on a Bauhaus Style Chess sent. We were interested in blending the simple strong geometric forms of the chess pieces with nature.

The chess pieces allows nature lovers to integrate their favorite succulents or herbs into their game play.

Each Chess piece can be planted with specific herbs or succulents to give them a level of individuality and personality. This also allows the player to assign unique textures, colors and smell to the pieces.

Use some Corsican Mint to bring some minty freshness into you game, or perhaps a series of hard wearing cacti if you don’t have a green thumb. (Read More.) 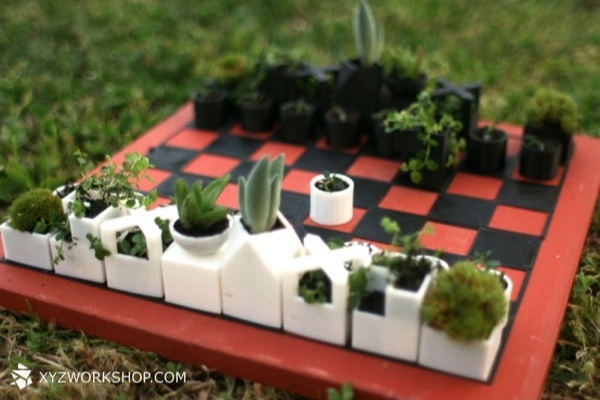