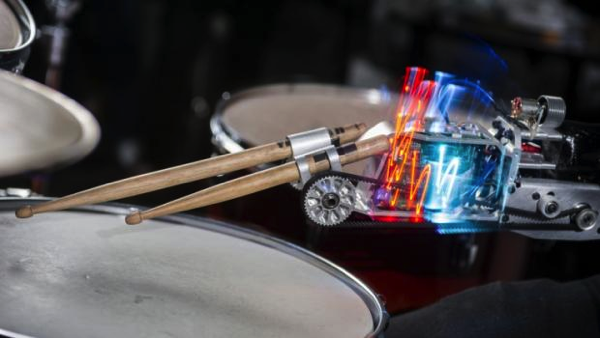 This is one of the coolest prosthetics we’ve seen- a robotic arm that actually improves the drumming skills of the wearer. Via CNET.

When drummer Jason Barnes lost his lower right arm to electrocution two years ago, his future as a musician didn’t look too promising. But thanks to a new robotic arm invented by Professor Gil Weinberg, founding director of the Georgia Tech Center for Music Technology, he may soon be the envy of the drumming world.

That’s because the new mechanical arm effectively gives Barnes the ability to use three different drumsticks while playing his kit. He holds the first in his left hand, as always. The other two are held by the robotic arm attached to Barnes’ right bicep. One of those sticks is controlled by the up-and-down motion of Barnes’ arm, as well as electrical impulses from his body measured by electromyography muscle sensors.

The other stick however, analyzes the rhythm being played and uses a built-in motor to improvise on its own, adding a dimension to drumming that’s heretofore not seen on any stage we know of.

“The second drumstick has a mind of its own,” Weinberg said in a statement. “The drummer essentially becomes a cyborg. It’s interesting to see him playing and improvising with part of his arm that he doesn’t totally control.”

Barnes finds it more than interesting. “I’ll bet a lot of metal drummers might be jealous of what I can do now,” he said. “Speed is good. Faster is always better,” he said, referring to the fact that the autonomous stick can move more quickly than humanly possible.