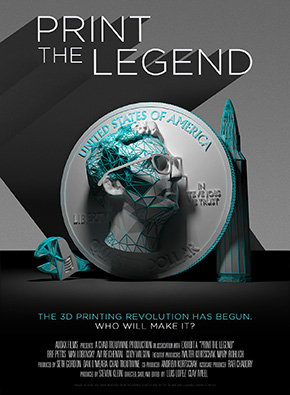 In attendance were a number of those featured in the film: Max Lobovsky (co-founder FormLabs), Zach Hoeken Smith (co-founder of MakerBot), Cody Wilson (founder of Defense Distributed), Michael Curry (formerly of MakerBot), and many others. (Including myself, as former MakerBot Community Manager and a writer on topics of 3D printing today.) Current staff from 3D printer manufacturers re-united with former colleagues, once-competitors shaking hands and talking about exciting developments in the field. It was an occasion for the sharing of many “battle tales” of the tough road that has taken “desktop 3D printing” from an extreme margin of industry into the mainstream media spotlight.

This was the first time most of us were seeing the festival cut of the film and we were as eager to see it as the festival attendees who lined up around the block. Print the Legend has as its backdrop the recent rise of the desktop 3D printing field as a whole, but focuses most of its screen time on intimate exploration of two key companies in this space: hardware startup darlings MakerBot and FormLabs.

ather than attempting to cover the thousands of participants in the movement — for example, the crucial RepRap movement and the DIY printer hobbyists (which would make a fantastic Jason Scott style archive like BBS: The Documentary), or the decades of inventors of countless numbers of printing methods duking it out to secure contracts and customers — the film sets as its central aim to create a nuanced document of the 21st century hardware startup. At heart this documentary is a film about hardware startups and those who participate in them — and the filmmakers had tremendous access to the thrills, upsets, hard calls and tough lessons that are typically invisible behind the meteoric rise of the technology brands that spring into prominence in our lives today.

While FormLabs and MakerBot are the chief focus, the documentary covers a number of additional figures from the field as well. 3D Systems’ Avi Reichental plays a central role — efforts on the part of 3D industry leader 3D Systems (and Stratasys also) to engage with and venture into the consumer space. Disrupting received notions about the role of 3D printing in contemporary society, sequences featuring Cody Wilson — (in)famous for the 3D printed handgun and other provocations — offer an anarchist counterpoint to the frequent claims of this recent period in 3D printing history as the “3D Printing Revolution.” And first hand accounts from participants in all stages of this time period weigh in on passionate dreams and hard realities from the factory floor.

This film is still in its first stages of release — doing the festival circuit while being wooed by distributors and various release platforms/venues — so there are limited opportunities to see it for now. Hopefully, in the near future, all of you who are curious about this film will get an opportunity to see it. And I look forward to all of the exciting conversations it will stir up about hardware startups and the 3D printing movement.

Comments Off on SXSW: Notes from the Premiere of 3D Printing Doc ‘Print the Legend’ #3DPrinting #MakerBusiness