…The frame of the plotter was taken from a ye olde Epson printer, reusing the two stepper motors to move the paper along its length and width. The pen is attached to the laser head of a junked portable CD player. With this, it’s just three stepper motors that allow the Arduino control system to move the pen across the paper and put a few markings down.

The motors on the printer are, in the spirit of reuse, still connected to the printer’s driver board, with a few leads going directly from the Arduino to the parallel port interface. The motor in the CD player is another ordeal, with a single H-bridge controlling the lifting of the pen.

On the software side of things, a Processing sketch reads an SVG file and generates a list of coordinates along a path. The precision of the coordinates is set as a variable, but from the video of the plotter below, this plotter has at least as much resolution as the tip of the pen.

Read more. He also made a CNC Mill from the same project — at bottom! 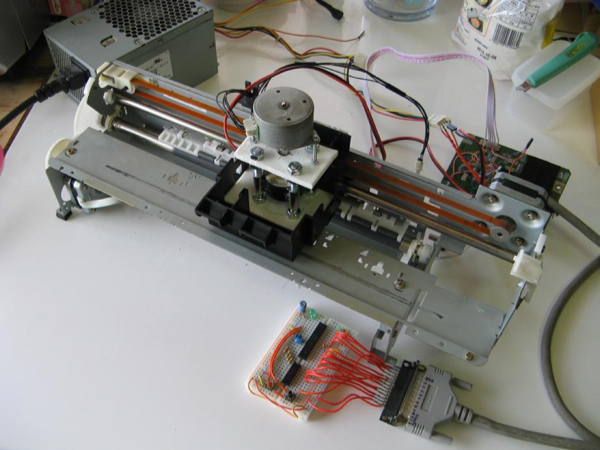 Comments Off on Old Inkjet Turned Into An SVG Plotter #penplotter