Smart Kegerator Keeps Your Tab for You @Raspberry_Pi #piday #raspberrypi

This kegerator bills users based on beer consumption. How does it know who’s drinking? It uses a raspberry pi for facial recognition! From hackaday.

Kegerator ownership is awesome, but it has its downsides. It’s hard to keep track of who drank what without cans or bottles to count. [Phil] was looking for a good solution to this problem when it came to sharing beer with his roommates and friends and has just completed the first iteration of his smart kegerator.

He has devised a system based on a Raspberry Pi. His software recognizes the face of the person pulling a beer and adds a charge to their tab based on the price of the keg and the volume of the pour. The system also keeps track of current and historic temperature and humidity values inside the kegerator, and everything is displayed on a Mimo 720S touch screen.

[Phil] has a flow meter on each keg to detect and monitor pouring. This triggers the Pi camera module to run the facial recognition. The walk-through found after the jump might be a bit confusing; at the time it was recorded, the unit was only capable of facial detection. [Phil] wrote the UI in QT and C++ and used Python scripts for the flow interrupts. His plans for future iterations include weight sensors underneath the kegs, liquid probe thermometers for more accurate beer temperature readings, a NoIR Pi camera module for low light conditions, and a really snazzy UI that you’ll see on his build page.

If you don’t have a Pi, here’s an Arduino-fied kegerator that reports temperature and controls beer cooling. 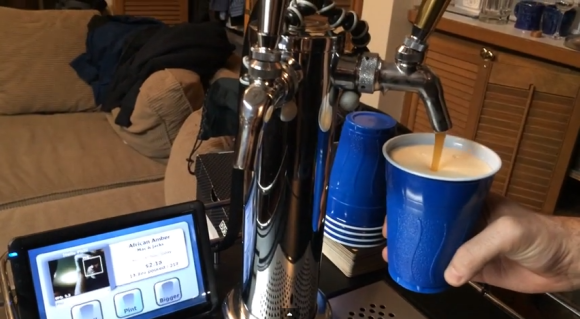 Check out the Adafruit Kegomatic!