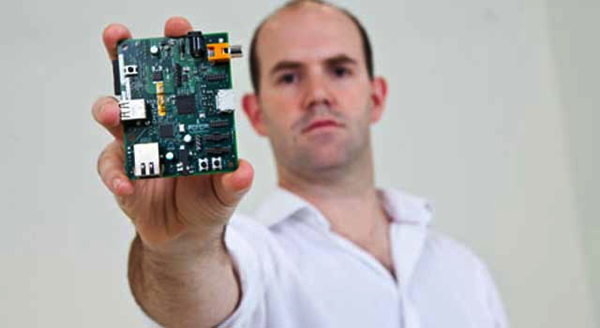 The Guardian has a great piece on Raspberry Pi’s story with a focus on Eben Upton, the creator of the Pi.

In the end, it took just over 10 months for Felix Baumgartner’s skydiving record from 24 miles to be broken. With considerably less publicity, a small cuddly toy named Babbage fell from a height slightly above the Austrian’s achievement after ascending to the stratosphere in a hydrogen-filled balloon.

The elaborate skydive to a field in Berkshire was accomplished using credit card-sized Raspberry Pi computers which released the toy from the balloon when it reached 31 metres above Baumgartner’s record and filmed the descent.

It is just one of a multitude of unique projects the bare-boned machine has been used for.

Launched in February 2012, more than 2.5m of the computers – which cost about £30 – have now been sold around the world, a prodigious landmark considering the group of scientists behind it thought they might sell 1,000 at most…

Talking over chess on their Friday afternoon “happy hours” in the lab, Upton and his colleagues decided to develop an affordable computer on which children could learn to program.

The group soon expanded to include local business people and by 2011 – after various different incarnations of the Pi – they came up with a computer deemed worthy of putting into production using hardware from Broadcom, the semiconductor giant where Upton is a chip architect.

A short video shown on YouTube detailing how they planned to sell the computer for $25 (£15) garnered 600,000 views, and in turn an urgency to produce the machine, which he described as “horrific”.