Man Gets First Prosthetic Capable of Reproducing Sensation of Touch

After an accident nine years ago, Dennis Aabo Sørensen severely injured his left hand and was required to have it amputated. Now, for the first time on record in a scientific journal, a team of researchers have developed a bionic hand for Sørensen that utilizes touch-sensitive feedback to recreate an artificial sense of touch. The hand works by converting feedback from sensors in the prosthetic hand to signals received by electrodes embedded in the remaining nerves in the man’s upper arm. From livescience:

With the hand, Sørensen was able to recognize different objects by their feel, and grasp them appropriately, according to the study detailed online today (Feb. 5) in the journal Science Translational Medicine.

“I could feel things that I hadn’t been able to feel in over nine years,” Sørensen, who lives in Denmark, said in a statement.

So far, Sørensen is the only person to test the prosthesis, and he’s had it for only a short time, but if proven to work over the long term in more people, the system could vastly improve the function of current prosthetic limbs and the quality of life for their users. 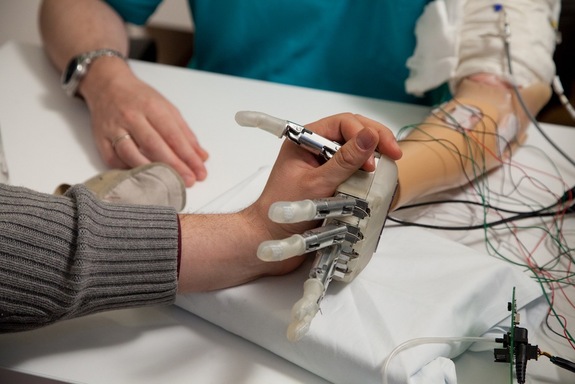 In a month-long clinical trial, Sørensen tested the hand, sometimes wearing a blindfold and earplugs so he could rely only on his sense of touch when using the hand. Sørensen was able to control how forcefully he grasped objects, and feel their shape and stiffness. He could tell the differences among hard, medium and soft objects, and identify the shapes of specific objects such as a cylindrical bottle or round baseball.

Sørensen told researchers that the artificial sense of touch was similar to the natural feeling he experienced in his other hand.